Giving a piece of yourself . . . to save another 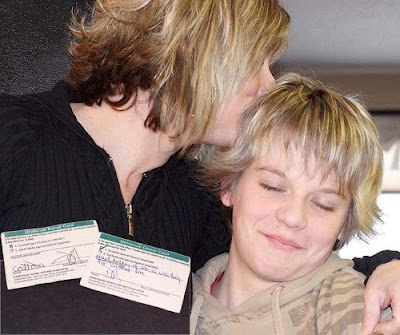 Dixie Hannan plants a kiss on her son Colton (12). When Colton was two and in need of a kidney transplant, Hannan gave him one of her own without question. What she calls a gift like no other saved his life. Dixie Hannan and son Colton have their health care cards signed to allow them to donate their organs and tissue to others should the time ever come. Photo: Damien Wood.

At any given time in Alberta, approximately 400 people will be waiting for an organ or tissue transplant.

This number isn’t abnormal – it’s about par with numbers in other provinces across the country – but it is a long and anxious wait. As transplants have became more accepted, it was deemed necessary for more people, and there aren’t as many organs to go around as one might hope.

The need and importance of organ transplants was discovered first-hand by Dixie Hannan about a decade ago, when her then two-year-old son Colton was in dire need of a kidney.

He was born with obstructed kidneys and had his first surgery the day after birth.

When doctors considered a transplant for the toddler, the family travelled to Fairview-University Medical Centre in Minneapolis, Minn., for the operation as it was best able to handle the surgery at that time.

“We knew nothing about it (transplants) at that point. When I was 16 I signed (my health card), but I never put any thought into it ... when Colton needed his transplant, then we did have to think about it,” said Hannan.

“We initially thought it was going to be (his father) and they generally, in that case, want it to be the father, because the mother is generally the caregiver. But we found, out once we were down in Minneapolis, (he) wasn’t eligible. So I turned out to be the donor.”

Colton’s surgery was a success, but many others in Alberta aren’t as lucky.

It’s basically a matter of supply and demand, according to Mike Bentley, director of patient care for the Human Organ Procurement and Exchange program (HOPE) at the University of Alberta Hospital.

“To be an organ donor right now, you have to suffer brain death, which is a very specific injury, where your body’s being sustained on life support, but your brain is dead. Most people don’t die that way. Most people suffer cardiac death ... about two per cent die in (the necessary) fashion,” said Bentley.

Tissue donation can include corneas, skin and heart valves. Bentley said demand for tissue is quite a bit higher than it is for organs, with 250 to 300 organ transplants being performed per year in Edmonton, compared to the approximately 1,500 tissues distributed for transplantation within the same time frame.

Rare as an eligible donor might be, 70 to 80 of those 400 can benefit from a single donor.

Finding eligible donors – and matches among those who are eligible – comes down to knowing who is willing. There is a spot on the back of the Alberta health card where a person can sign their wish to donate their organs, but this is far from binding.

“It’s part of the process, but it is very important that you have discussions with your family about your wishes. The health-care card doesn’t always come into play when someone has actually died ... it’s more expressing your intentions than a legal document or anything like that,” said Bentley.

Across the Peace Country, the issue of organ donation is grabbing more attention.

“I think that people, in a time of crisis in their lives, tend not to think about making these kinds of donations. It’s something that people need to do – to make others aware of their wishes – long before a crisis occurs,” said Carmen Johnson, president of the Rotary Club of Grimshaw Centennial.

The Rotary Club of Grimshaw Centennial made awareness of the need and importance of organ donation a priority this year, after it was brought to their attention by Ter Hamer, a member whose wife, Julianne, was once the recipient of a heart.

“We have started taking it to other Rotary clubs ... we would like to make this much more than (a one-year) campaign,” said Johnson.

Hannan said donation was something she never thought of until her son was born. There was never really the question of whether she would go through with the donation. It was her child – whatever it was, she would have done it.

Today, her health card states her as a donor of all organs, except for her other kidney should her son need another when the time comes.

Asked about her now 12-year-old son is doing, Hannan said, “he’s here.” Colton’s life comes with its fair share of complications, but the transplant saved his life.

“Rejection is a big problem. That’s why recipients receive quite a number of anti-rejection drugs ... over time these have advanced tremendously and very effective. People do well over the long-term,” said Bentley.

Bentley said recipients are prone to infections, and it is actually the rejection treatment, a lifetime of immuno-suppressant medication, which causes that. The immune system must basically be hindered to counter rejection.

“There are a lot of side effects. It’s not a cure – it’s a treatment ... no matter what type of transplant, your body will always fight it ... it knows it’s a foreign organ,” said Hannan.

“He’s a sick kid, but he’s a healthier sick kid. I think most people who meet him on the street wouldn’t have a clue, and most of the time he doesn’t know that he is sick either.”

“(Life is) pretty normal ... I can do whatever I want, pretty much,” said Colton.

Colton was too young at the time to remember very much of anything regarding his own experience with organ transplants, but as he has grown up, he has become well aware of it, as well as passionate – he has signed that precious spot on his own health card.

“I think it’s good that people donate organs, because then other people can live. If you aren’t using your organs, you might as well leave them to somebody else,” said Colton.

“Probably anyway I would have (signed the card, regardless of his own experiences). I can save other people’s lives.”

Hannan calls organ and tissue donation a gift like no other. Bentley said many will live long and productive lives after a transplant. Not everybody, he admits, but he points out many of these people would die without the transplant.

Transplantation is a person’s resort, but Bentley believes without question it is worth it.