This story has special meaning for me because I got to know Jessica and her family several years ago. Jessica was anxious to "give back" for the gift of life she had been given by her lung transplant in June of 2005 and volunteered as a speaker to promote organ donation. She also helped me organize a lung transplant picnic in June of 2006. My thoughts and prayers are with Jessica and her family during this trying time. 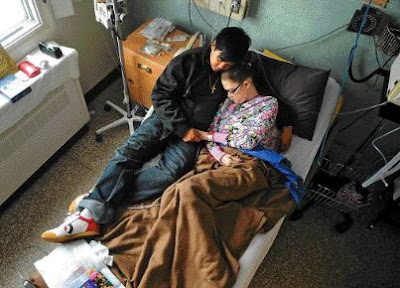 Jessica Mogg is terminally ill, but she didn't let that end her dream of getting married.
Photo: MATHEW McCARTHY, Record staff

Jessica Mogg thumbs through a pile of wedding photos scattered across her hospital bed.

Two days after the ceremony, she still can't believe how fast it all happened.

But getting married was something the 27-year-old just had to do. Mogg, who has cystic fibrosis, doesn't know how much longer she'll live.

She and Colin Panyadeth, her boyfriend of 10 years, had planned to marry in September of this year.

This month, however, Mogg had to be admitted to hospital. It's a place she knows only too well, after dealing with her debilitating disease since birth. Most people with the disease die in their 20s or 30s.

Since her late teens, cystic fibrosis has made her lungs so frail she hasn't been able to work. Three years after a double-lung transplant, doctors say Mogg needs another one.

But she's feeling so sick, she has decided against more surgery. She has a few weeks to live at most.

This didn't curb her desire to marry Panyadeth, 26.

"I'd been feeling really bummed out," Mogg said yesterday, with tubes under her nose to help her breathe. "I don't know how much longer I'll be around. But I wanted to marry him so bad."

The couple have been together since they met at an all-ages event at Metropolis, a Kitchener nightclub now called the Wax. Panyadeth had gotten into a fight, and one of the other teens accidentally shoved Mogg to the ground. Panyadeth came to her rescue.

Ten years later, the two are still inseparable. They've grown up together.

And on Tuesday morning, Mogg's nurses told her it was time to make her wish for a wedding come true -- right there at the St. Mary's Hospital chapel.

"She was having a bit of a better day and the nurses knew she wanted to do it," said her sister, Shannon Langer, 33.

Two nurses slipped home to grab a few dresses for Mogg to chose from. Another nurse got a hair dryer and makeup. They all chipped in for a bouquet of red roses, and Mogg sent her sister to buy a tiara.

Panyadeth didn't argue -- he knew their wedding would come eventually, though maybe not that soon.

"I just sat back and took it in for half an hour," he said. "Then I got my hair cut, bought the rings, and went to the hospital."

By 3 p.m., everything had fallen into place.

Mogg wore a chocolate brown, strapless, floor-length dress. Her nephews, aged four and six, walked ahead of her down the aisle, and kissed her on the cheek at the altar.

Nurses followed behind, with a wheelchair in case she felt weak.

About 50 family, friends and hospital staff attended the wedding, mostly a symbolic ceremony, because there was no marriage license.

Mogg's beloved 90-year-old grandmother from Cambridge was there. So was Dr. Jonathan Langridge, Mogg's favourite doctor, who read a prayer. Nurses who had worked the night shift returned to the hospital for the service.

"It was amazing," Mogg said. "I was just so shocked. I was so honored they would do that for me."

She didn't shed a tear.

"I was just so happy. I was laughing, almost."

Yesterday, Mogg was in a lot of pain.

Cystic fibrosis causes a buildup of thick mucus, which leads to infection, inflammation and damage to delicate lung tissue.

"I don't know how I'm going to deal with it," said Panyadeth, who does upholstery. For now, he just wants to be there for her.

"The time you have together. You don't take it for granted."

It's difficult for Mogg's family, knowing the end is near. But they've noticed a change since the wedding.

Mogg is at peace.

"I don't know what I could do that would make me as happy as this."

Posted by Merv Sheppard at 7:05 AM