Ontario organ transplant officials expect within months to start transplanting organs from people who have been declared dead after heart failure, a procedure hailed as a new era for organ donation in Canada. The current practice is to remove organs from patients declared brain dead but whose hearts are still beating, allowing the organs to be maintained on a respirator until they are transplanted.

This is wonderful news and the directors and management of Trillium Gift of Life Network in Ontario are to be commended for their progressive initiatives to help improve organ donation rates and save lives by doing so. There are about 1,800 people waiting for a transplant in Ontario and some will die before receiving their "Gift of Life". One of the main reasons I became a volunteer to promote organ and tissue donation was because I saw so many people die while on the waiting list. Some had become my friends and it hurt me to no end when they didn't make it. In 2004, 122 people died while on the waiting list.

Tuesday, the Trillium Gift of Life Network, the provincial agency in charge of organ and tissue donations, announced an Ottawa hospital was the first in Canada to successfully transplant organs from a woman who died of heart failure after life support was removed.

Ontario is the first province in Canada to accept organs from people who have died of a heart attack. Until now, as stated above, the practice was to remove organs from patients declared brain dead but whose hearts are still beating.

Those hospitals that have the surgeons and skills will start with kidney transplants and expand to lungs and livers as expertise develops.

The Institute of Medicine (IOM), the SCCM (Society of Critical Care Medicine) and the JCAHO (Joint Commission on Accreditation
of Hospital Organizations) have concluded that Deceased Cardiac Death (DCD) is an ethically proper approach of recoveriing organs from a deceased patient for the purpose of transplantation.

Last year, The Canadian Council of Donation and Transplantation convened a forum in Vancouver, British Columbia whose report promotes “patient-care based principles for providing the option of donation within a sound ethical framework” and supports donation after cardiocirculatory death. The aim of this national conference is to expand the practiice of DCD in the continuum of quality end-of-life care..

For the full conference PDF report go to: Report of a National Conference on Donation after Cardiiac Death.
To view PDF files you will need Adobe Acrobat Reader installed on your system. If you don't have it you can download it free at: Adobe Reader 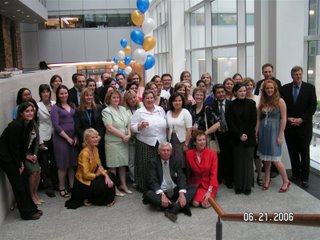 University Health Network, Toronto, Canada set an ambitious goal of raising $400 million at the start of their fundraising campaign in November, 2002.

That goal was achieved a year early and a new goal of $500 million was targeted. Even that was exceeded and the final total is $554 million; by far the most successful hospital fundraising campaign ever held in Canada.

So a celebration was in order and many of those responsible gathered at the new MARS Discovery District adjacent to Toronto General Hospital. This state of the art facility was designed to provide an enviornment that would attract and retain the most promising researchers and clinicians and to make UHN a contender in the global competition for scientific talent.

I was pleased to be a part of the campaign and was very happy to be invited to the celebration and party with Toronto General & Western Hospital Foundation (TGWHF) staff and others who I've come to know and admire for their dedication and hard work in helping to raise funds so that patients' lives can be transformed and saved by the best staff and facilities available anywhere in the world. I know, because my life was saved by a single-lung transplant a little over four years ago, thanks to the skills and research of the people at University Health Network. Go to the above link for my photo journal.
Posted by Merv Sheppard at 10:41 AM No comments:

Sunday June 18th turned out to be a perfect day for a picnic; although it was warm, it wasn't humid and a cooling breeze wafted through the shaded picnic area all afternoon. The comraderie, warmth and bonding of everyone turned the event into a happening and a pleasure to be part of. 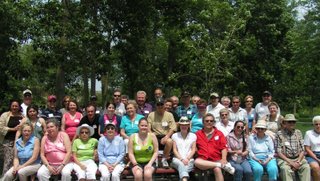 Many lung transplant recipients attended, some as recent as three months post transplant and others, such as Linda Lycett and Ken Rumohr are celebrating 14 years of their "new life" this year. Several patients on the "waiting list" for a transplant came to join in (with spare oxygen tanks) and several told me they were given hope and inspiration by meeting and talking with those that were looking so well after their transplant.

The picnic was held on Father's Day, as it was the only date available to us this year. Next year's picnic is planned for June 24th, a week after Father's Day.

All in all the day was a huge success, thanks mainly to the wonderful volunteers that showed up early and stayed late to help set-up and take-down.
Posted by Merv Sheppard at 2:12 PM 4 comments:

I received this email from Lynn Tucker, who was a support person for a lung transplant recipient at Toronto General Hospital. Her message says it all and I wish to thank Lynn for the honor she has given me with her writing. Merv.

"Hi Merv,
Wednesday June 14th, 2006 is International Webloggers' Day.
My son, Alex, and I are participants in this celebration.
We have created and will moderate an online forum dedicated to the day. My blog has the details of the format questions for the forum.

I invite you and all of your readers to participate in this forum.
I know that not all of us are bloggers, but I do know that we all use the net as a life-tool these days. Your voice matters.

Bloggers can help that voice get loud and strong.

In honour of International Webloggers' Day I have written my blog post dedicated to you, Merv Sheppard.

My heart is with everyone from Transplant, and I have done my best to help carry the message as far as I can. You are an inspiration for me to share my world with others. To use my gift of writing to open up other people's hearts and minds.

Thank You Merv for using all the tools at your disposal to touch all of us.

Come to my blog.
Join in the banter and review the past posts, and have your message known in Comments"
Posted by Merv Sheppard at 2:38 PM No comments:

This is a reminder that the memorial service is this evening Friday, June 9th at 7:00 P.M. Whether you are a recipient, donor or donor family, it is a wonderful event for our transplant community. You may be unable to attend due to distance or other circumstances, but if you can possibly make it this is one event you won't want to miss. I look forward to seeing you if you plan on being there.

St. Michael's is just east of the Eaton Centre on the corner of Shuter & Bond.
This is a wonderful opportunity to show our thanks and appreciation to our donors and their families.
Posted by Merv Sheppard at 6:00 AM No comments:

Thanks to Marly Jack for contributing the following report suggesting that pre-bagged salads are potentially growing e-coli and can be a dangerous health hazard. This is of special importance to those of us who are immune-suppressed because of the anti-rejection drugs we are taking.

"You may want to pass this one to your friends and loved ones.
Please read the MSNBC report.

Did you watch Dateline on Sunday evening? They did a documentary on cut-up lettuce and spinach in plastic bags. They took us through the whole process and talked about Ecoli now that is showing up in the salad mix in bags. They don't know yet how the Ecoli got in, but they do know deaths and serious sicknesses are occurring in many states. One woman told about how her child was near death from the lettuce and was sick for a long time. They warned us not to buy any until they find out from investigation what is causing this.

The Dole Company has recalled their bags."
Posted by Merv Sheppard at 6:01 AM No comments: 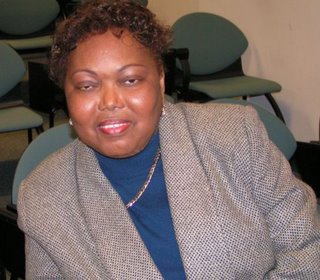 It is with great sadness we announce the passing of Monica Henry this past Sunday, May 28th. Monica received a double-lung transplant January 2, 2002. Please join me in expressing our deepest sympathy and condolences to Monica’s family and friends. Monica’s obituary follows with funeral arrangements and times. This photo of Monica was taken at the lung transplant Christmas Party in 2003.

My special thanks to all who notified me of Monica’s passing and sent the following information. Merv.

HENRY, Monica Adina (nee Fraser). Surrounded by her close friends and family, Monica Adina Henry peacefully ascended to be with her Lord, on May 28, 2006, after a courageous battle. Devoted daughter of Dorothy Galloway ''Miss May''. Loving mother of Cheryl and Shurnette. Sister of Boysie ''Junior'', Hyacinth, Lloyd and other siblings, nieces and nephews. The family wishes to thank all who helped in her care during her illness. Monica will be lovingly remembered by her family and a host of friends. Family and friends will be received at Thistletown Baptist Church, 2534 Kipling Avenue, Etobicoke on Saturday, June 3, 2006 from 10:30 a.m. until time of funeral service at 11 a.m. Interment Brampton Memorial Gardens. You are invited to sign Monica's Book of Condolences on-line at Scott Funeral Home.
Posted by Merv Sheppard at 9:16 AM 4 comments: