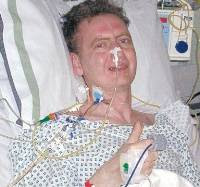 By the Evening Leader UK

A Flintshire chef who underwent a double lung transplant is to hold a charity night on the anniversary of the operation.

Father-of-one Ken Mackie, 37, from Buckley, Flintshire, is organising the event a year after he went under the knife to help relieve the effects of his cystic fibrosis.

He plans to celebrate a year of good health and to remember the young man who gave him a second chance at life.

Ken, who was diagnosed with the condition at the age of 21, said: "We will hold a murder mystery night at my former workplace, the Druid Inn in Pontblyddyn, to raise money for the CF Trust and the New Start transplant unit at Wythenshawe hospital, where I had my transplant, on January 22, 2008."

Ken was put on the transplant list on January 15 last year, and waited just a week to find a match.

Since the operation, the former head chef no longer suffers with the symptoms of CF, which affected his lungs, but still deals every day with pancreatic problems, diabetes, high cholesterol and high blood pressure.

"This time last year I was in and out of hospital, in very poor health," said Ken, who lives with his family on Mayfield Drive, Buckley.

"We usually get the video camera out on Christmas Day and this was the first year that I wasn't coughing in the background. It's unbelievable how much better I feel now."

The young father says he has now pledged to make people aware of not only CF but of the importance of donor cards.

"The night won't just be a way to raise money for charity and to celebrate my year of health, but it will be a way to commemorate the young man who died and donated me a healthy set of lungs, and to think of the family who lost their son," said Ken.

"After all these years of suffering with CF, they have given me the thing I have always wanted – to be able to walk my little boy to school – and after the transplant, now I can.

"I have had lots of support from the local people and from local businesses for the night and Southdown Primary School have been particularly generous and donated £260 to the two nominated charities."

Posted by Merv Sheppard at 6:34 AM