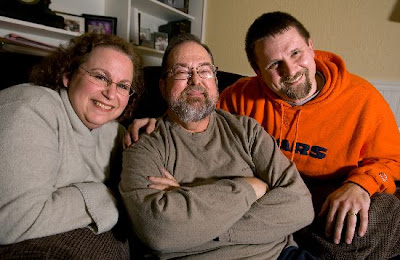 When Paul Miller needed a new kidney in 1999 as the cysts that had plagued him for 20 years began to win the battle, his wife didn't hesitate to volunteer one of her own.

She looked at her husband, saw how weak he was becoming, and said to herself, "Whatever it takes to make him better, that's what I (want) to do." She underwent tests, turned out to be a match and gave her husband one of her kidneys.

Nine years later, as Paul Miller's 61-year-old body gradually rejected the kidney, his son David Miller, 34, followed his step-mother's example. He and his father completed the second kidney transplant for this tight-knit family on Dec. 11 at the University of Wisconsin Hospital in Madison.

Having two family members donate kidneys to a transplant patient over several years is unusual but not unheard of, said Dr. Yolanda Becker, a UW Hospital transplant surgeon.

For Andrea Miller, the decision was an easy one.

She'd been reading up about kidney transplants so she knew that organs from living donors last longer than those taken from cadavers and that waiting for a donor could take two or three years.

Still, she'd had surgery before and it had been a bad experience. And she knew the operation — an open surgery, not commonly used for kidney transplants anymore — would come with the risk of large scars, hernias, chronic pain and a long recovery period.

The result proved to be well worth the risk. Her husband showed almost immediate improvement. In his words, "it was like a light switch" had turned on inside him. "It was just like being a different person," he said.

In fact, when she awoke shortly after the surgery, Andrea Miller said, she was "in dire straits." But her husband was already there, sitting by her side.

"I said, 'What are you doing here?' " she laughed. "He was feeling like a million bucks."

Just a few months after it became apparent his father would soon need another transplant, David Miller, his wife, Dana, and their children, 6 and 7, faced another big scare: an MRI scan showed a tumor in Dana's brain. She would have to have surgery to remove it, and soon.

Yet he remained steadfast in his decision to help his father.

"Don't get me wrong, at times I was a wreck," he said. "I just went back to: All other things being equal, I'm still going to do this. I still think it's important."

Dana Miller's tumor turned out to be benign and her surgery was a success.

A few months later, father and son went through the transplant surgery. Doctors performed the surgery laparoscopically, which is less invasive and carries fewer risks than the open-incision procedure Andrea Miller underwent years before.

It was another success, although Dana Miller jokingly pointed out that she's now in charge of removing the snow from the walk while her husband recovers.

Again, Paul Miller's recovery was swift. He was out of the hospital in three days, although his surgeon, Dr. Josh Mezrich, said he looked like he was ready to go home within an hour of the surgery. The kidney was a good match and his prognosis is good, Mezrich said.

"There's no reason to think that he can't do well for a very long time," he said.

Paul Miller's hands, still splotched with purple bruises from all the IVs, still shake slightly when he cuts into his morning pancakes, but the wheelchair he once needed now sits in the trunk of the car. His wife said she plans on returning it soon.

"I don't know a better blessing a father could have," he said of his family's generosity.

He and his family are grateful for lots of other things: for the insurance company that covered almost all the costs of both transplants, for the staff in the transplant ward at UW Hospital who made the unbearable a little less so, and for the friends, coworkers and family who came to talk and to help out.

And should he need another kidney some day, his experience over the past 10 years has shown him that he has a wealth of good will to draw on. His two other children also offered up kidneys this year, as have numerous other family members and friends. Even his regular UPS delivery man offered to get tested back when he first needed a transplant.

"We have a lot to be thankful for," Andrea Miller said.