When I read that Brian Maloney had eleven false alarms for his lung transplant I was incredulous. I heard of one transplant patient having four calls to rush to the hospital for their transplant only to find the donor lungs were not suitable, but eleven false alarms is probably a world record. I have great empathy for Brian knowing how excited he must have been with each call only to have his hopes dashed. Hopefully the new Ex-vivo procedure described below will make lungs viable that would have been previously unsuitable. 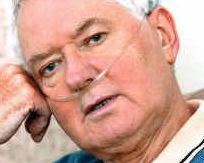 BRIAN Maloney desperately needs a lung transplant. But on each of the eleven times he's been summoned to hospital to prepare for the operation, he has been sent home without surgery.

Brian, 60, has been on the waiting list for a replacement lung for 15 months and every few weeks since then he has been called into hospital as doctors prepare and test donor organs.

But each time the lungs have been deemed unusable or they have both been given to someone waiting for a double transplant.

Doctors at Wythenshawe Hospital say they have never known a patient be so unlucky so many times.

He said: "I desperately need a transplant now. Every time they call me in I have to prepare myself for the operation, it is impossible not to get your hopes up when it is the only option open to you.

"Mostly I've been called in at night and then have to wait - too excited and nervous to sleep - before being sent home in the morning.

"I am really pleased to have been called in for the operation because I know lots of people on the list die without ever being called in but it is tough," said Brian, who has decided to talk about his experiences to encourage more people to become donors. Mr Maloney's partner of six years, Hilary Grimshaw, said: "It is so traumatic preparing yourself for such a big operation and then going home without having it."

He said: "We call in two or three people each time an organ becomes available because we want to ensure we use all suitable organs.

"We do always warn people we may not be able to carry out the procedure and often people will be called in a few times before having an operation but this is a very unusual case."

Mr Maloney, who suffers from the deadly condition pulmonary fibrosis, has signed up for a pioneering procedure which was tested at Wythenshawe last month.

Doctors now have the technology to use lungs from people who have not been kept alive by machines. Central to this is a new technique to test lungs 'ex-vivo' - outside the body - to check they are suitable for transplantation.