25-year-old waiting for lung transplant No. 3 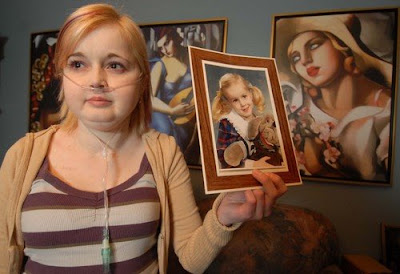 Stratford, Ontario resident Julia Lyons, holding a picture of herself as a youngster, is awaiting her third double-lung transplant. SCOTT WISHART/The Beacon Herald

By Laura Cudworth The Beacon Herald

Julia Lyons doesn't want anything extraordinary -- she just wants to be able to walk down the street and breathe.

At 25 she can't do that. So for the third time in her life she'll go through a double-lung transplant.

It's likely she's the first person to endure three double lung transplants in Canada. The communications department at Toronto General Hospital didn't know whether it will be a first either in the country or at the hospital.

Ms. Lyons was diagnosed with cystic fibrosis at four months old. The genetic disease affects multiple organs, particularly the lungs and digestive system, and is the most common fatal hereditary disease in young Canadians.

"I'm just so tired of constantly fighting, part of me wanted to say no," to the third transplant, Ms. Lyons said.

She had her first double lung transplant a month before her 15th birthday and her second when she was 20.

This set of lungs is failing because she has chronic airway rejection. Each time she gets an infection, tissue forms and starts closing off the airway. She's been hooked up to oxygen since May. Each time she's exposed to an infection it gets worse.

"I have good days and bad. Some days I sleep 18 hours and it's hard getting to the car, breathing wise," she said. "In general I'm OK, I just can't get the air in."

She almost died 12 hours after the second lung transplant when her heart stopped. Despite the trauma and pain, when the surgery became the only option she knew she'd do it. She doesn't consider it an act of courage.

"What are the other options? It's this or a hole in the ground," she said. "Who am I to give up this opportunity? They're offering this to me, I may as well take up the opportunity that's offered."

Her illness has certainly taken a toll on her parents and siblings as well.

"They say when you have a child your life changes but when you get a sick child it turns topsy-turvy upside down," said father David Lyons.

For her part, Julia worries about the stress on her family.

"It's hard dealing with it but it must be harder being a parent when you can't do anything to help. It sucks to be in my position too, I won't deny that,"she said.

She also worries about the effect her deterioration has on her younger brother, Christian, because he also has cystic fibrosis though not to the same extreme.

She went back on the transplant list Dec. 17. Now it's a matter of waiting. She'll carry a pager from the hospital but until it arrives the hospital will call her cell phone first if a set of lungs is available.

Until then every time the phone rings it could be the call to go to the hospital.

Chances are good though she'll get to celebrate Christmas with her mom, dad, sister Emily and brother Christian in Stratford before she moves to her aunt's house in Pickering to be closer to the hospital.

The estimate is six months for lungs based on her blood type and size, she said. For the first set she waited just five weeks and for the second set four months.

"I'm hoping for four months this time, but it's the luck of the draw," she said.

Most of Ms. Lyons' medications are covered by her dad's insurance, but she needs a $250 oxygen monitor among other essentials and trips back and forth to Toronto get expensive for the family.

Contributions to the Julia Lyons Foundation trust fund can be made at Libro Financial Group and the Kiwanis Club will issue a charitable receipt.

"I want people to know I really appreciate it,"she said.

Toronto General Hospital reports 20 per cent of lung transplant patients die waiting for a transplant. Canada has one of the worst rates of organ donation in the world. It's something Ms. Lyons hopes to see change as methods for transplantation and survival rates improve.

"A lot of people are superstitious: they think if they sign they will get in a crash or if the doctor sees the (donation) card (is signed) they won't work on you as hard. That's not true," she said.

MERV'S NOTE: If you would like to send Julia your best wishes you can e-mail her at: jewels.brat@gmail.com

I wish everyone Happy Holidays
and all the best for 2009! Merv.

Posted by Merv Sheppard at 4:45 AM

Merv and anybody interested-
Unfortunately you only posted half of the article that was published. To read it in its entirety, you can go to the link on the newspaper's site at http://www.stratfordbeaconherald.com/ArticleDisplay.aspx?e=1362552 . Happy New Year!
Julia Lyons