This is quite a long story but I'm posting it completely to raise awareness of how crucial it is to strictly comply with taking prescribed medications to prevent rejection following an organ transplant. 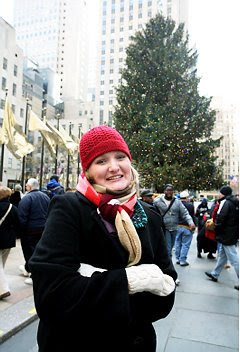 So when doctors told the heart-transplant recipient this might be the last holiday season of her life, the 22-year-old from Birmingham, Ala., said: "I'd really love to see the Christmas lights of New York City."

Her aunt, Lee Dorough, has a friend who knows a guy who knows Teddy Atlas, the renowned boxing guru who runs an amazing charity called the Dr. Theodore Atlas Foundation.

Thursday morning, an Atlas Foundation van whisked them from the Excelsior Hotel to the New York Jets training camp in Florham Park, N.J., where they met Coach Eric Mangini and the team made famous by a guy named Joe Namath, who played for the University of Alabama.

This weekend, Carlton and family are enjoying dinner at Ducale, the hot new Columbus Ave. restaurant, catching the Christmas Show at Radio City, lunching at Gallagher's and seeing "Wicked" on Broadway.

As if that weren't enough, their schedule included dining at The Palm, shopping on Fifth Avenue, and visiting the Rockefeller Center Christmas tree, St. Patrick's Cathedral, the Empire State Building and the Statue of Liberty before winging back to Alabama tonight.

"The only other thing I could have dreamed of was meeting Stephen Colbert of the 'Colbert Report,'" says Carlton. "He makes me laugh even in my darkest days...."

"There is a possibility that I could be retransplanted, so I'm hoping for a Christmas miracle," she says.

Carlton was on the volleyball and rowing teams at Hoover High in Birmingham when she was diagnosed with congestive heart failure at 17.

"Three weeks later, I had a heart transplant at University of Alabama Hospital at Birmingham," she says. "I graduated high school. And went to Emory University, where, thanks to my new heart, I played volleyball and majored in Spanish and actually got to study abroad for two semesters in Salamanca, Spain."

In those college years, when all her schoolmates were out partying, drinking and dancing till dawn, Carlton had to take some 60 pills a day, refrain from alcohol and get to bed early.

"The doctors gave me the heart of a strong, 22-year-old man, an incredible gift of prolonged life," she says. "I cannot stress enough how vital and enormously generous organ donation is."

But she made mistakes.

The stresses of college and being a transplant recipient sometimes overwhelmed her.

When her weakened immune system led to ulcers and shingles, she missed weeks of class, which required stressful makeup work. In the frantic youthful jumble, Carlton sometimes missed her meds.

"The greatest percentage of heart transplant failures happen with patients between the ages of 15 and 25 due to medication noncompliance," she says.

"Who amongst us hasn't screwed up as a teenager?" asks Teddy Atlas.

A few months ago, Carlton learned that her body was rejecting her new heart. She was told that this could be her final Christmas.

"It was my fault," she says. "And now my heart, that gave me five additional years of life, is literally killing me."

She says that if by some Christmas miracle she gets a new heart and even five more years of precious life, she would dedicate herself to working on noncompliance issues.

"The doctors are excellent, but so focused on being heart-healthy that they don't know how to tend to these kids who die from medication noncompliance," she says.

"There is no psychological training to help a kid prepare for your life as a transplant recipient. You undergo an identity change. You can go from a star athlete to a transplant kid. You can't do what your peers do. You're different...."

Carlton also wants to dispel the crazy myths that scare people into believing that if you sign up as an organ donor and get into a car wreck that doctors won't try to save your life. Or that organ donors won't be able to have an open casket at a wake.

"It's all so untrue," she says. "I wish I could show the whole world that my heart worked for five great years. And that I have so many friends who've had their hearts for 25 years.

"Now the doctors will tell me what my options are - whether to risk a second transplant or just live out the months I have left.

"I have no idea what the future holds, but I cannot tell you how grateful I am that I am getting to see the Christmas lights of New York City."

I just received information from my son that Ann passed away. She was a wonderful person. She will be missed by many.