She wants to update her cooking blog, and she's taken up the violin. 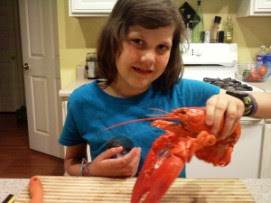 Normal activities for any 10-year-old girl, perhaps, but they're miraculous for this Eden Hall Upper Elementary fifth-grader from Gibsonia.

A native of New Zealand, Matisse Reid was born Dec. 25, 2000 with a rare bowel condition called chronic idiopathic intestinal pseudo obstruction. Unable to eat because of the effects of the disease, she relied on IV feedings to keep her alive.

She underwent an organ transplant of a small and large intestine a year ago today at Children's Hospital of Pittsburgh of UPMC. The procedure enabled her to eat for the first time.

Now she is an inspiration to families whose children await transplants as she transitions to a nearly normal life.

Matisse has missed more than half of her school life because of illness, but her family says she is doing surprisingly well considering that.

"Prior to her transplant, Matisse found it really difficult to have extracurricular activities because she was too sick to maintain the practice and put in the time required," says her mother, Jodee Reid.

These days, Matisse is looking forward to singing in the school chorus and playing for the Miracle League baseball team. She's also writing her cooking blog, and her interest in food landed her an article in Parade magazine that will be published Sunday, Dec. 11.

Jodee Reid says Parade writer Kate Meyers interviewed Matisse about her life, her transplant, her interest in cooking and her move from New Zealand to the United States.

"Matisse cooked for Kate, which was really interesting as Kate’s husband is the editor of Cooking Light Magazine, so Kate truly has a broad culinary exposure," Jodee Reid says.

"She enjoyed the seafood alfredo Matisse cooked and was pretty impressed. Kate has interviewed some pretty big stars, so it was an honor to have her interview Matisse and show so much interest in her life."

This week, Jodee announced that Matisse has been asked to be a contributor for Cooking Light Magazine as the Kid Foodie.

Matisse has come a long way from the multi-organ transplant she underwent a year ago, through countless lab tests to monitor potential organ rejection, bouts of severe pain, anti-rejection medicines, and round-the-clock monitoring.

The child's story touched her Western Pennsylvania community, which rallied around the little girl with the bubbly attitude.

After the transplant, her school hosted a replenishment blood drive that drew 75 people, including Matisse's father, Wayne, and her sister Rachel, to sign in and donate blood.

Neighbors brought the family meals as Matisse's parents took turns staying with Matisse during the six weeks she spent in Children's Hospital.

Matisse also was a cause celebre before leaving New Zealand. Her community there rallied around the family to raise money for their U.S. living expenses while they waited for the transplant.

Jodee Reid still keeps a journal of her daughter's journey in which she's detailed many ups and downs — not only with Matisse's health, but also of many children battling serious illnesses whom the Reids have gotten to know and love over the years. It can be heartbreaking to read, but it also celebrates even small victories.

The family has struggled with finances and with sleep-deprivation from round-the-clock care, but Jodee Reid writes in moving language about how it's all worth it to see Matisse transformed from a sickly child to one with "the energy of a 2-year-old."

As Jodee Reid wrote in the Sept.18 entry in her CaringBridge.org journal:

As new as this is to me, you can imagine how it is for Matisse. It is like discovering the world for the first time. It also highlights how much she has missed out on, and that there is some definite social conditioning that she has skipped altogether.

I feel this year is going to be very difficult for Matisse academically — we've never held her back even though she has missed at least half her school life. I also feel it is going to be a huge adjustment socially. We are thankful that Matisse is in a wonderful school [with teachers and administrators] who 'get it'.

Matisse herself is really trying to find where she fits now. When she was little there was never really a label or place for the chronically ill. When I finally accepted the 'special needs' label, we found places where Matisse fit.

Now she is torn between her special-needs self and this new well, healthy self. An incredible issue which I had never thought about, and one we would much rather have than chronically ill, but still another problem to solve.

An example is Miracle League — baseball for special needs. Matisse loves it and was welcomed back with open arms, however, after the first game she said to me "Mum, I'm not really special-needs anymore am I"?

On the day before the anniversary of Matisse's transplant a year ago, Jodee Reid thanked the family of the donor, as she has done many times during the past year, in her journal entry:

This time last year we woke like it was a normal day, oblivious to the fact that a mother and father were saying goodbye to their child and allowing us to say goodbye to 10 years of chronic idiopathic intestinal pseudo obstruction.

This was the last day of Matisse's life that she had to endure being sick.

At 6 p.m. we got our ninth transplant call [and] those words — "We have organs for Matisse" — to us meant hope, but to another family meant saying goodbye to their precious child.

Please keep all donor families, but especially ours, in your thoughts today. Tomorrow we celebrate one year post transplant, but today we mourn the loss of a child we never knew who gave us the greatest gift.


“You Have the Power to Donate Life – to become an organ and tissue donor Sign-up today!
Tell Your Loved Ones of Your Decision”
Australia, register at Australian Organ Donor Register
New Zealand, register at Organ Donation New Zealand
Canada - Ontario beadonor.ca
other Canadian provinces
South Africa, http://www.odf.org.za/
United States, organdonor.gov
United Kingdom, register at NHS Organ Donor Register
Your generosity can save or enhance the lives of up to fifty people with heart, kidneys, liver, lungs, pancreas and small intestine transplants (see allotransplantation). One tissue donor can help by donating skin, corneas, bone, tendon, ligaments and heart valves
Has your life been saved by an organ transplant? "Pay it forward" and help spread the word about the need for organ donation - In the U.S. another person is added to the national transplant waiting list every 11 minutes and 18 people die each day waiting for an organ or tissue transplant. Organs can save lives, corneas renew vision, and tissue may help to restore someone's ability to walk, run or move freely without pain. Life Begins with You.
Posted by Merv Sheppard at 9:19 PM