Growing Organs In The Lab: A potential end to immune rejection

Last June, Andemarian T. Beyene, 36-year-old man with tracheal cancer received a special gift: a brand new trachea, made from a synthetic scaffold seeded with his own stem cells. Following this surgery—the first of its kind—he made a full recovery and was discharged from the hospital four weeks later. The procedure made international headlines, and shone a much-needed spotlight on two important problems that it might help in part to resolve: long wait times for organ transplants, and immune rejection of implanted organs. In what follows, we offer a brief overview of these issues, look a bit closer at the surgery itself, and ponder some of the implications.

As of November 2011, the Organ Procurement and Transplantation Network, a division of the U.S. Department of Health & Human Services, is reporting that over 112,000 Americans are waiting for an organ transplant. At the same time, the average annual expense per patient of immunosuppressive drugs—administered following a transplant to prevent the body from rejecting the new organ—is more than $11,000, and in some cases can reach as high as $25,000, according to the American Society of Transplant Surgeons.

These sobering statistics are driving a campaign within the biomedical research community for innovation.

A complex and technologically advanced organ allocation system links patients with organs donated by strangers. The shortage of organs causes most patients to wait for a transplant, and waiting times vary widely for many reasons. The amount of time a patient waits does not reflect how well as transplant center or organ procurement organization is doing its job; each patient’s situation is different. Some patients are more ill than others when they are put on the transplant waiting list. Some patients get sick more quickly than other patients, or respond differently to treatments. Patients may have medical conditions that make it harder to find a good match for them. 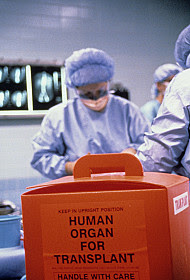 How long a patient waits can depend on a multitude of factors. These can include blood type (some are rarer than others); tissue type; height and weight of transplant candidate; size of donated organ; medical urgency; time on the waiting list; the distance between the donor’s hospital and the potential donor organ; how many donors there are in the local area over a period of time; and the transplant center’s criteria for accepting organ offers. Depending on the kind of organ needed, some factors are more important than others. Under certain circumstances, special allowances are made for children.

Since 1984, the nonprofit United Network for Organ Sharing (UNOS), located in Richmond, Virginia, has operated the Organ Procurement and Transplantation Network, under a contract with the Division of Transplantation in the Department of Health and Human Services. UNOS maintains a central computer network containing the names of all patients waiting for kidney, heart, liver, lung, intestine, pancreas and multiple-organ transplants. Patients on the waiting list are in end-stage organ failure and have been evaluated by a transplant physician and hospitals in the U.S. where organ transplants are performed.

Such locally oriented allocation makes medical sense because less time between donor and recipient usually means more chance of a successful transplant as well as fewer complications that could threaten the viability of the organ. Eighty percent of all organs are donated and used in the same geographic area.

Organ transplant recipients must take immunosuppressive drugs every day for the life of their transplant. Failure to take these medications significantly increases the risk of rejection. These drugs are not without side effects and risks. Because the majority of them act non-selectively, the immune system is less able to resist infections and the spread of malignant cells. There are also other side effects, such as hypertension, dyslipidemia, hyperglycemia, peptic ulcers, and liver and kidney injury. The immunosupressive drugs also interact with other medicines and affect their metabolism and action.

Immunosuppressive drugs can be classified into five groups—glucocorticoids, cytostatics, antibodies, drugs acting on immunophilins, and other drugs—each with their own specific uses.

For example, in pharmacological doses, glucocorticoids are used to suppress various allergic, inflammatory and autoimmune disorders. They are also administered as posttransplantory immunosuppressants to prevent acute transplant rejection and graft versus host disease. Nevertheless, they do not prevent infection and also inhibit later reparative processes. Cyostatics inhibit cell division. In immunotherapy, they are used in smaller doses than in the treatment of malignant diseases, and they affect the proliferation of both T cells and B cells. Antibodies are sometimes used as a quick and potent immunosuppressive therapy to prevent the acute rejection reactions as well as a targeted treatment of lymphoproliferative or autoimmune disorders. The drugs acting on immunophilins include cyclosporin, tacrolimus and sirolimus, whereas additional drugs used as immunosuppressants include interferons, opioids, TNF binding proteins and mycophenolate.

In light of the challenges posed by transplant wait lists and the need to choose the optimal immunosuppressive therapy to facilitate transplants, it is significant that for the first time ever, a patient was recently given a new trachea made from a synthetic scaffold seeded with his own stem cells. As noted earlier, the patient, 36-year old Andemarian T. Beyene, made a full recovery and was discharged from the hospital following the operation. The operation was performed on June 9, 2011 at Karolinska University Hospital in Stockholm, Sweden, by Paolo Macchiarini, MD, PhD, Professor of Regenerative Surgery at the Advanced Center of Translational Regenerative Medicine at Karolinska Institutet, Stockholm, Sweden, and colleagues (Jungebluth P, Alici E, Baiguera S, et al. Tracheobronchial transplantation with a stem-cell-seeded bioarti?cial nanocomposite: a proof-of-concept study. Lancet 2011; Published online November 22, 2011 DOI:10.1016/S0140-6736(11)61715-7).

Previous transplants of tissue-engineered tracheas have been performed, but on those occasions the tracheas used were taken from organ donors and then reseeded with the patients’ own stem cells. For example, in 2008, 30-year-old Claudia Castillo successfully underwent this type of procedure in Spain (Macchiarini P, Jungebluth P, Go T, et al. Clinical transplantation of a tissue-engineered airway. Lancet 2008; 372: 2023-2030).

The international team involved Professor Alexander Seifalian from University College London who designed and built the nanocomposite tracheal scaffold, and Harvard Bioscience of Holliston, Massachusetts, which produced a specifically designed, shoebox-sized bioreactor used to seed the scaffold with the patient’s own stem cells. The cells were grown on the scaffold inside the bioreactor for approximately two days; the scaffold was rotated while its surface was soaked with stem cells obtained from a bone marrow biopsy from the patient’s hip. The patient’s stem cells settled into the pores within the scaffold and began to grow into each other, slowly transforming from individual cells into genuine tissue. A few days after the implantation of the new trachea, the man’s own blood vessels actually started to grow into it, transforming the new organ into a part of his own body. Because the cells used to regenerate the trachea were the patient’s own, there was no rejection of the transplant and the patient was not taking immunosuppressive drugs.

The patient had been suffering from late-stage tracheal cancer. Despite maximum treatment with radiation therapy, the tumor had reached approximately 6 cm in length and was extending to the main bronchus. It was progressing and almost completely blocked the trachea. Since no suitable donor windpipe was available, the transplantation of the synthetic tissue-engineered trachea was performed as the last possible option for the patient, referred by Professor Tomas Gudbjartsson of Landspitali University Hospital (Iceland) who was also part of the surgical team.

The successful transplantation of tissue-engineered synthetic organs, referred to as regenerative medicine, could open new and very promising therapeutic possibilities for the thousands of patients who suffer from tracheal cancer or other conditions that destroy, block or constrict the airway.

It is extremely important to note that this procedure is still experimental and will need to be sanctioned by the U.S. Food and Drug Administration for the more than 100,000 Americans who are waiting for organ transplants to benefit from it.

What does tomorrow hold for this type of medical technology? For the immediate future, the scaffold approach to generating synthetic body parts will be limited to growing tubular organs such as trachea and blood vessels, rather than more complex organs such as kidneys and livers. However, other types of organs may become a practical option in time.

Transplantations of tissue-engineered windpipes—and potentially other tubular organs like esophagus, blood vessels and urethras—with synthetic scaffolds in combination with the patient’s own stem cells, as a standard procedure, means that patients would not have to wait for a suitable donor organ. This would be a substantial benefit for patients since they could benefit from earlier surgery and have a greater chance of cure. In addition to treating adult patients, tissue-engineered synthetic trachea transplants would, not least, be of great value for children, since the availability of donor tracheas is much lower than for adult patients.

If this scenario unfolds as some predict, it might mean the start of a new era in the treatment of thousands of patients whose lives and health will be improved.

David Green is President of Harvard Bioscience, Inc., a global developer, manufacturer and marketer of a broad range of specialized products used to advance life science research and regenerative medicine. He can be reached at dgreen@harvardbioscience.com.


“You Have the Power to Donate Life – to become an organ and tissue donor Sign-up today!
Tell Your Loved Ones of Your Decision”
Australia, register at Australian Organ Donor Register
New Zealand, register at Organ Donation New Zealand
Canada - Ontario beadonor.ca
other Canadian provinces
South Africa, http://www.odf.org.za/
United States, organdonor.gov
United Kingdom, register at NHS Organ Donor Register
Your generosity can save or enhance the lives of up to fifty people with heart, kidneys, liver, lungs, pancreas and small intestine transplants (see allotransplantation). One tissue donor can help by donating skin, corneas, bone, tendon, ligaments and heart valves
Has your life been saved by an organ transplant? "Pay it forward" and help spread the word about the need for organ donation - In the U.S. another person is added to the national transplant waiting list every 11 minutes and 18 people die each day waiting for an organ or tissue transplant. Organs can save lives, corneas renew vision, and tissue may help to restore someone's ability to walk, run or move freely without pain. Life Begins with You.
Posted by Merv Sheppard at 8:59 AM