'I was so scared but I was so happy and excited'

By MEGAN BURKE The Recorder & Times 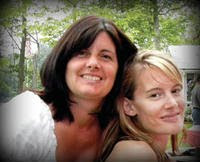 Submitted photo - Lyndsay Biccum, 23, right, gets a hug from her mother Marnie Wood in a family photo taken prior to Biccum undergoing a double lung transplant at Toronto General Hospital. The community rallied together for Biccum by raising $10,000 for her at a spaghetti dinner that drew more than 600 people.
Lyndsay Biccum of Johnstown, Ontario rarely told anyone that she has cystic fibrosis, even though she has lived with it her entire life.

Once word spread, people in the Prescott-Johnstown area banded together to hold a spaghetti dinner to help Biccum offset her costs as she works towards getting better. Between 600 and 700 people showed up for the dinner to show support and pulled together $10,000, all for Biccum.

The Recorder and Times spoke with Biccum, who is temporarily living in Toronto to remain close to the hospital, about what she went through leading up to surgery, her response to community support and what it was like to take her first deep breath of air.

Q. How are you feeling?

Q. Can you briefly explain what cystic fibrosis is?

A. It's a multi-system disease that can mostly affect your digestive system and lungs. You create more, thick mucus in your lungs that builds up, so it's harder for you to breathe.

Q. How was it growing up with cystic fibrosis?

A. It was OK. When I was younger I was only hospitalized once. Until I was probably 19 though, I was OK, because I played a lot of sports and was very active. I got sick when I was 19 with a virus and they don't know what it was, but after that my health just went downhill, which led to my transplant. But up until I was 19, I was pretty healthy.

Q. How could you tell your lungs were no longer working properly?

A. It was hard for me to do normal things. Walking upstairs became a challenge. I couldn't do groceries by myself anymore because I would get too tired. At the end it was hard to take a shower by myself. Just normal, everyday things I couldn't do by myself. It was awful. I felt like I had to be dependent on somebody all the time.

Q. What was it like to find out you needed a double lung transplant?

A. It was scary at first because I really didn't think I was that bad or in need, but I found out I did need it and doctors actually listed me in need of a donor. They decided it was probably time.

I was scared at first but then as time went on, doctors explained that because I was so young everything should be fine. Because my health was good, considering how active I was before, they said that everything was going to be fine and I'd bounce back no problem.

By the time I actually got my transplant, I was excited for it. I could go back to normal again.

Q. How was the wait for donor lungs?

A. I was in the hospital in Kingston for four weeks on oxygen and I only waited for three weeks for a lung donor because they listed me a week after I got there. It wasn't that bad -- I was lucky.

Q. What were your feelings when you were told they had lungs for you?

A. It was indescribable. Crazy. Every emotion you could ever feel was going through me. I was so scared but I was so happy and excited I just wanted to get it done.

Q. How did you mentally prepare yourself for the surgery?

A. It was a lot. I had to do things I never really thought I'd do before. I had to write my final wishes down and things like that, and that's hard because I'm 23 and I shouldn't be having to do that.

My mom and dad were really supportive and were like, everything will be fine. They were my rock. If I had a breakdown they'd tell me it's going to be good, it'll be fine, you're going to feel much better. I was pretty stable mentally.

The Toronto General Hospital and the nursing staff is 100 per cent top of the line. The nurses are amazing. If you have any questions they answer them, they explain everything to you. The doctors and surgeons are just out of this world and I want to thank them for being so good to me and helping me through everything.

Q. What was it like to take your first breath following the surgery?

A. It was crazy. I had a breathing tube in for the first day. I kept wanting to breath by myself so they had to tell me to let the machine breathe for me.

And then after they took the breathing tube out, I was laying in bed and I was like, did I forget to breathe or am I still breathing because I was so used to breathing so quickly and fast that after I was breathing like a normal person, it was weird at first. But I got used to it pretty fast and it felt really good.

Taking deep breaths was almost unexplainable. It felt kind of weird because really I've never been able to breath normally, ever. Even when I was feeling good, it still wasn't normal.

Q. Can you notice a difference?

A. A major difference and I don't cough at all anymore. Whenever I do clear my throat everyone asks, are you OK? But there's no coughing anymore at all. It's weird, kind of.

I haven't been able to get up and cook a meal in two years and now I can cook supper when mom's here or I can go to the grocery store and get groceries or walk down the block without getting out of breath. It's crazy.

The worst part is not my breathing, it's trying to get my legs back into shape because I was in the hospital for seven weeks before and I wasn't really moving that much, so my muscles have deteriorated. But they're coming. I can walk back and forth to the hospital now. It's coming back to normal.

Q. Did you have any post-operatic issues?

A. We had a couple bumps in the road because I had a little rejection at first and that was pretty scary because I thought my lungs weren't going to work, but they sat down and explained that it happens to everybody, you'll be fine, we'll treat you -and they did. They treated me with medication and three days later I was back feeling normal again.

Q. What kind of rehabilitation are you looking at?

A. I'm going to physiotherapy three days a week just for muscle building and strength. I go on the treadmill, do weights, stretches and go on the bicycle for about two hours a day. They said it'd take about three months. I should be home for good middle of February.

But I was at the doctor's the other day and they said I'm about three weeks ahead of where I should be. I'm a very stubborn person to begin with, so my dad said it doesn't surprise him at all. I feel amazing. Every day I feel a little better and every day I can do something else.

Q. When back to full strength, what is the first thing you want to do?

A. I just want to go back to my normal life. Doing normal things, getting up, a normal routine.

I'm going to go back to school in September to take business accounting. I went to school after high school for medical lab technician and I worked in Ottawa for three years but then I got sick and had to quit working last February.

Doctors told me because of my immune system being low from all my medications, I shouldn't go back to working at a lab because it'd be easier for me to catch viruses and stuff that makes me sick. I always liked accounting in high school so I thought I'd go back to school for business.

Q. What did you think of the spaghetti dinner held for you in Johnstown?

A. At first I was was like OK, that would be fun. Then in the weeks leading up to it, people told me they sold this many tickets or we sold this many more and I couldn't believe it. I knew people knew me in Prescott and Johnstown but it was indescribable how many people actually went to donate and support me.

When I was younger, I didn't really tell that many people I had CF. A lot of people came up to my mom and dad that I went to high school with or were my teachers and they said, 'I didn't even know Lyndsay had cystic fibrosis.' They were like, 'this was such a shock for us.' But it's overwhelming the amount of people that came out to support just me.

A couple of times my mom came up to the hospital to see me and told me some of the things that people were doing. It made me cry because I couldn't believe people were doing something like this just for me. The support from the community has been overwhelming.

Q. When you come home will you be giving a big thank you?

A. Oh yes. I'm coming home for a week at Christmas and I'm going to try and see as many people as I can. We're going to have a thank you dinner that we're going to put on after I come home for good for everybody in the community to drop in and say hi, because there's no possible way to go everywhere to see everybody. We're going to see them and say thank you.

“You Have the Power to Donate Life – to become an organ and tissue donor Sign-up today!
Tell Your Loved Ones of Your Decision”
Australia, register at Australian Organ Donor Register
New Zealand, register at Organ Donation New Zealand
Canada - Ontario beadonor.ca
other Canadian provinces
South Africa, http://www.odf.org.za/
United States, organdonor.gov
United Kingdom, register at NHS Organ Donor Register
Your generosity can save or enhance the lives of up to fifty people with heart, kidneys, liver, lungs, pancreas and small intestine transplants (see allotransplantation). One tissue donor can help by donating skin, corneas, bone, tendon, ligaments and heart valves
Has your life been saved by an organ transplant? "Pay it forward" and help spread the word about the need for organ donation - In the U.S. another person is added to the national transplant waiting list every 11 minutes and 18 people die each day waiting for an organ or tissue transplant. Organs can save lives, corneas renew vision, and tissue may help to restore someone's ability to walk, run or move freely without pain. Life Begins with You.
Posted by Merv Sheppard at 7:00 AM