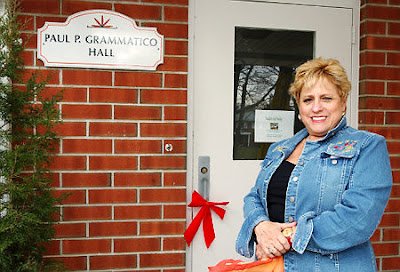 Claudia Grammatico, 59, has become a tireless campaigner for organ donation since donating her son's organs and tissues in 1999. She travels across the metro area, state and country and remains active with the New York Organ Donor Network.

From the Daily News in New York:

Claudia Grammatico's eyes still cloud up as she recalls that more than eight-year-old vision of her son Paul, lying in a hospital emergency room.

Though his body was virtually unscarred, the 26-year-old successful stockbroker and athlete was brain-dead, killed with his best friend, Michael Penny, in a May 19, 1999, traffic accident in Atlantic Beach, L.I. Both were thrown from the car they were in, which was being driven by a drunken driver.

"I was devastated," Grammatico said. "That was my son. When you lose a child, you lose part of your future."

In the emotional blur that was her son's final hours, the Valley Stream mom did something that would change her life, the lives of dozens, if not hundreds, of other people, and in the process created a lasting legacy for Paul, her only son.

"They took Mike directly to the morgue," Grammatico said. "I was given something his mother was not given, and that was a chance to say yes.

"You don't say that yes loudly, you whisper it," she said. "That has to be one of the holiest words I have ever said."

That yes meant a new life for then-48-year-old Joe Senatore of Bay Shore, L.I., who got Paul's heart, and for the 63-year-old retired science teacher in Kansas and 54-year-old Nevada father who each got a kidney, the 56-year-old upstate New York woman who got his liver and the 59-year-old Massachusetts woman who got one of his lungs.

TRENTON, N.J. - Thousands mourned after Jason Ray, who dressed as the University of North Carolina mascot, died after being hit by an SUV during a March basketball team trip to New Jersey, but four lives were saved by the organs Ray donated.

Among them was Antwan Hunter, a 16-year-old from Newark whose only kidney was failing.

"It's sad that they had to lose a son," Antwan's mother, Latisha, said of Ray's parents. "But others gained lives."

The Hunters were among those Thursday backing legislation unveiled by a top legislator to require people applying for driver's licenses and identification cards to state whether they want to be an organ donor. It would also require high schools to teach about organ donation. Read the full story.

Giving the Gift of Life During the Holidays
Press Release
EARTHtimes.org:
PHILADELPHIA, Dec. 19 /PRNewswire-USNewswire/ -- The holidays are a time when many of us are focused on gifts and giving. But there are thousands of people in this community who are hoping to receive the most important gift of all this season - the gift of life.

This past year, more than 1,000 people in our community have already received a life-saving transplant, thanks to the generosity of many donors and their families. But even more continue to wait - specifically, close to 5,400 people in this region alone, joining the 100,000 patients who wait nationwide.

Gift of Life Donor Program - the organ procurement organization for eastern Pennsylvania, southern New Jersey and Delaware - urges you to help give hope during the holidays and register as an organ and tissue donor. You can now give the greatest gift online as well. It's simple, quick, and just one donor can save or enhance the lives of up to 50 people.

In Pennsylvania and Delaware, residents who want to support organ and tissue donation can act immediately instead of waiting until you renew your driver's license to add the donor designation to their license. Through the two state Web sites, Donatelife-pa.org and Donatelife-de.org residents with a driver's license or state I.D. card have the ability to go online to a secure page within the state's Department of Transportation Web site to add the donor designation to their record immediately.

In New Jersey, you can also log onto Donatelifenj.org to get more information about donation, as well as sign up to be alerted when the state's online registry is ready.

Regardless of where you are, it's also important to talk with your family and friends about your decision to donate, so they can understand your wishes and see how important it is to designate themselves.

Check out Donors1.org and link to either the Pennsylvania, New Jersey or Delaware Donate Life sites. Saving lives is just one click away!

Posted by Merv Sheppard at 8:11 AM