Organ donor and recipient meet after gift of life 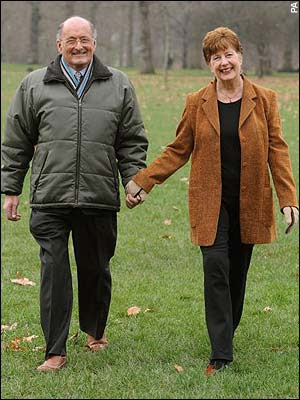 From The Telegraph in England:

In an anonymous wood-panelled dining room at a London hotel, two strangers shared a quiet but emotional embrace.

Unable to find words to express his gratitude to the Good Samaritan whose act of extraordinary generosity had transformed his life, moist-eyed Andy Loudon simply reached out to give her a warm hug.

An hour later Barbara Ryder and Mr Loudon became the first altruistic stranger donor and recipient to speak publicly about their experience.

Earlier this year Ms Ryder, a nurse from Launceston, in Cornwall, had surgery to have a kidney removed, allowing the organ to be transplanted into Mr Loudon, despite never having met him.

Ms Ryder, 59, who had a close friend who died of kidney failure, was only the second person in the UK to have made a non-directed, altruistic kidney donation - also known as a stranger donation.

Speaking at the Science Media Centre, she said: "You get a lot of fun and happiness from giving something that can change a life. Read the full story.

Avoid the transplant lottery
From the Ottawa Citizen (Canada):

The human drama surrounding a heart transplant is a powerful illustration of why organ donation remains such an essential gift of life. Reporter Patrick Dare and photographer Julie Oliver, together with editors and designers at the Citizen, have admirably captured some of the most complex and wrenching challenges we face daily at the University of Ottawa Heart Institute in their feature series this week.

Every day, our people apply a lifetime of compassion, skill and knowledge to tend to the sick, teach others and revolutionize cardiac treatment through research discoveries. Many of the treatments developed here become Canada's gold standard of care and our discoveries help beat back the ravages of heart disease.

Heart transplantation is, in fact, a means of last resort for patients whose hearts can no longer support life. Waiting for a transplant has been described as a lottery. It is a lottery we would rather you not have to play. Read the full article.

Desperately Seeking a Kidney
From The New York Times:

By SALLY SATEL
In the fall of 2005, I started my first online relationship. He was a 62-year-old retiree from Canada; I was a 49-year-old psychiatrist living in Washington. Beginning in early October of that year, we talked or e-mailed several times a week. This arrangement was novel to both of us, so our conversations were tentative at first, but we soon grew more comfortable, and excitement over our shared vision blossomed. After a few weeks, we decided to meet for a uniquely intimate encounter. After New Year’s, the Canadian would fly to Washington to meet me — at a hospital, where he would give me one of his kidneys. Thank God. Read the full story. The ending will surprise you.

Posted by Merv Sheppard at 8:40 AM