Herald Sun, Australia
A MAN is awaiting a liver transplant in a Sydney hospital after two of his friends died from eating death cap mushrooms at a New Year's Eve party. 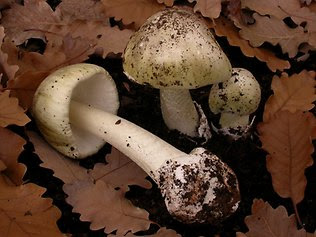 The death cap mushroom closely resembles other edible varieties.
The 51-year-old man remains in a critical but stable condition at the Royal Prince Alfred Hospital in Camperdown.

Four people became ill after eating the poisonous mushrooms at a party to see in the new year in Canberra, but one was discharged from hospital on Tuesday.

A 52-year-old woman and a 38-year-old man were flown to Sydney for treatment but were confirmed dead yesterday.

The other man drove to Sydney after mistakenly consuming the world's most deadly mushrooms.

He took himself to Manly Hospital after experiencing symptoms of poisoning and was transferred to Royal Prince Alfred Hospital yesterday.

A fourth man who ate the poisonous meal, believed to have been prepared by the deceased couple, has recovered.

The four victims, all of Asian background, may have mistaken the death cap mushrooms for an edible variety, paddy straw mushrooms, which are readily found in Asia.

Five people have now died in the ACT from poisoning from death cap mushrooms in the past decade.

In the same period, 15 have been seriously poisoned.


“You Have the Power to Donate Life – to become an organ and tissue donor Sign-up today!
Tell Your Loved Ones of Your Decision”
Australia, register at Australian Organ Donor Register
New Zealand, register at Organ Donation New Zealand
Canada - Ontario beadonor.ca
other Canadian provinces
South Africa, http://www.odf.org.za/
United States, donatelife.net
United Kingdom, register at NHS Organ Donor Register
Your generosity can save or enhance the lives of up to fifty people with heart, kidneys, liver, lungs, pancreas and small intestine transplants (see allotransplantation). One tissue donor can help by donating skin, corneas, bone, tendon, ligaments and heart valves
Has your life been saved by an organ transplant? "Pay it forward" and help spread the word about the need for organ donation - In the U.S. another person is added to the national transplant waiting list every 11 minutes and 18 people die each day waiting for an organ or tissue transplant. Organs can save lives, corneas renew vision, and tissue may help to restore someone's ability to walk, run or move freely without pain. Life Begins with You.
Posted by Merv Sheppard at 9:57 AM