Bungling medics dropped a donor heart in a city street just yards from the medical center where a life-saving operation was about to be performed. 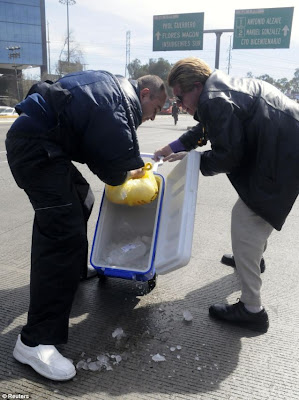 Easy does it: The heart, in the yellow plastic bag, was quickly picked up and shoved back into the ice box before it was taken into the Mexico City hospital to be transplanted. The operation was a success.
Moments after the helicopter transporting the donor organ landed in a Mexico City street a stethoscope-wearing medic jumped from the aircraft assisted by one of the pilots as a patient waited in a nearby hospital.

The doctor was helped by another medic who took control of the blue coolbox used to keep the organ stable and chilled during transport.

t was then that things started to go wrong.

Mexico City police say they used a helicopter to deliver the heart to the hospital in a 'rapid, precision manoeuvre'.

The heart had been flown 450km from Leon, Guanajuanto to the Centro Medico de Enfermedades Reumaticas in Mexico City.

But in the few short steps from the helicopter landing pad to the hospital entrance the two medics managed to topple the wheeled coolbox spilling the plastic-wrapped heart onto the tarmac.

The heart had then to be scooped up from the street, along with the ice and accompanying medical fluids, before it could be used in the complicated procedure.

Only after it had been repacked in ice was it taken inside to the waiting transplant team.

Falcony Rodrigo Lopez, director of the hospital, confirmed to local media that the operation had been a success.

The Health Department confirmed that the recipient was at the hospital during the incident.


“You Have the Power to Donate Life – to become an organ and tissue donor Sign-up today!
Tell Your Loved Ones of Your Decision”
Australia, register at Australian Organ Donor Register
New Zealand, register at Organ Donation New Zealand
Canada - Ontario beadonor.ca
other Canadian provinces
South Africa, http://www.odf.org.za/
United States, donatelife.net
United Kingdom, register at NHS Organ Donor Register
Your generosity can save or enhance the lives of up to fifty people with heart, kidneys, liver, lungs, pancreas and small intestine transplants (see allotransplantation). One tissue donor can help by donating skin, corneas, bone, tendon, ligaments and heart valves
Has your life been saved by an organ transplant? "Pay it forward" and help spread the word about the need for organ donation - In the U.S. another person is added to the national transplant waiting list every 11 minutes and 18 people die each day waiting for an organ or tissue transplant. Organs can save lives, corneas renew vision, and tissue may help to restore someone's ability to walk, run or move freely without pain. Life Begins with You.
Posted by Merv Sheppard at 9:45 AM