I wish everyone a very happy, healthy and prosperous New Year as we turn the corner to 2012. As a transplant survivor (lung, 2002) every extra year of life is special for me as I'm sure it is for every organ recipient and their loved ones. One of my favorite things to do New Year's Day (this year it's a day later, on Jan 2nd, due to New Year's being on a Sunday) is watch the Rose Parade and for football fans, the Rose Bowl Game later in the day. This year it's Wisconsin v. Oregon in The B1G's Biggest Bowl Game of the Year. If you want to see the floats up close and personal tune into KTLA from Los Angeles early for extensive pre-parade coverage. KTLA is carried by most cable companies as a superstation. 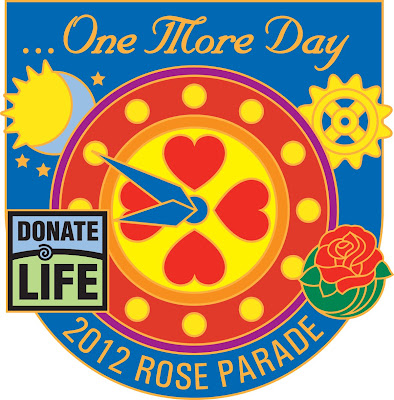 One portrait shows an 11-month-old baby who died tragically in an icy car accident. Another shows a 71-year-old Minnesotan whose unexpected death resulted in the gift of sight through the donation of his corneas. These and 70 other honorees who in their deaths gave life to others through the donation of their organs, eyes and tissues will be showcased for 47 million viewers through "floragraph" portraits on the Donate Life float in the 2012 Rose Parade®.

The portraits of 72 donors from 31 states, Canada, Japan and Taiwan add deep meaning to the Donate Life float theme, ...One More Day. Nearly a third of the honorees were teenagers when they became donors, while four became donors as seniors. Every story is compelling and reflects the power any individual can have in making the commitment to be a donor. Their portraits, each made entirely of organic floral materials, will be featured on huge floral timepieces that remind us of the preciousness of time we have to spend with our loved ones.

Donate Life's 72 floragraph honorees and 28 riders represent all donors, transplant recipients, and candidates on the waiting list. The float will also carry thousands of roses with personal dedications of love and remembrance in a unique Dedication Garden supported by people around the world.

"Every donor counts when the waiting list for life-saving organs continues to grow while the circumstances for organ donation to be possible are so rare," said Bryan Stewart, chairman of the Donate Life float committee and vice president of communications at One Legacy, the nonprofit organ and tissue recovery organization serving the greater Los Angeles area. "By honoring these 72 individuals, we hope to remind people that donors have the power to save up to eight lives and heal 50 more through organ, eye and tissue donation. We can all make a difference by joining their state donor registries."

The floragraphs will be decorated before Christmas in Pasadena, and many of the portraits will be completed by the family members themselves at special events in their hometowns. One of these will feature Stella Espino, whose untimely death last year saved eight lives and helped 85 others. Her husband, Juan Espino, will complete her floragraph at a ceremony at the Ft. Worth, Tex., headquarters of his employer, American Airlines. Juan will later ride the float alongside Stella's floragraph during the parade.

A number of other riders will share the float with floragraphs of their loved ones and donors. The floragraph of professional boxer Francisco "Paco" Rodriguez of Chicago will be accompanied by two riders: his brother, Alex Rodriguez, and the teacher who received Paco's lung, Ashley Anne Quinter of Spring City, Pa. The portrait of nine-year-old Christina-Taylor Green, who was killed in the shooting that wounded Rep. Gabriel Giffords in Tucson, will float above her mother, Roxanna Green, when she rides the float. Tissue donor Thomas Pettit of Sherman, Tex., will be honored in a floragraph by his stepson, Brandon Witt, who will ride with his Facebook friend Joey Ianiero of Bloomsburg, Pa., one of the 85 people who benefitted from Thomas' gift. Donor Lisa Pond of Lacey, Wash., will be honored in a floragraph by her life partner Janice Langbehn of Olympia, Wash., whose experience in Lisa's final hours prompted a presidential directive to ensure hospitals allow gays and lesbians access to their hospitalized partners.

The deaths of teens honored by floragraphs run the spectrum from those killed in drive-by shootings, such as Julio Villegas, Jr. and Melanie Miers of Palmdale and San Bernardino, Calif.; to vehicle accidents, such as Hailey Rath of Beloit, Mich.; Dylan Peters of Burlington, Vt.; and Katherine "Katie" Enos of Westford, Mass., who at 14, lived just long enough to have her first date, first kiss – and save a life. Some honorees became donors as a result of sports injuries, including Scott Edwin Davis of Huntington Beach, Calif., and Heath River Eiland of Austin, Tex. Others became donors as a result of unforeseen medical conditions, such as Roberto DeJesus Perez of North Bergen, N.J.; Jordan House of Plainfield, Ind.; and Angela Marie Guest of Allen, Tex. The family of 17-year-old Don Boone of Pineville, La., hoped they did the right thing in donating his heart, liver, kidneys and corneas. Months later they discovered his English paper, which read, "I would gladly give my organs to a needy person."

Two stories of donation generosity involve Departments of Motor Vehicles (DMVs), which have played a central role in signing up more than 100 million Americans on state donor registries. When he signed up for his learner's permit in Las Vegas, Nev., young Aric Brill told his mother, "I would want someone else" to use his organs. Only months later, Aric saved six lives after being shot to death by gang members in a robbery. In El Sorbante, Calif., Kimberley Williams-Ibarra began working for the DMV right out of college; it became her career over 19 years. When a blood clot in her lungs took her life, she was able to donate tissue that healed the lives of 50 people.

Three floragraphs feature donors from outside the U.S. In Tokyo, Rie Tanaka was only the fifth person in Japan to become an organ donor after brain death. She saved the lives of seven people. A pulmonary embolism took the life of Krista Heidinger of Lethbridge, Alberta, Canada, a mother of three whose husband was certain she would have said, "Jared, let's save some lives." In New Taipei City in Taiwan, 16-year-old Chih-Chien Hsaio lost his life in a scooter accident. His organ, tissue, and cornea donations benefitted more than 60 people.

More than 28,000 lives are saved each year in the U.S. through the gift of organ donation, giving hope to the more than 112,000 people awaiting a life-saving organ transplant. In addition, every year hundreds of thousands of people need donated corneas and tissue to prevent or cure blindness, heal burns or save limbs.


“You Have the Power to Donate Life – to become an organ and tissue donor Sign-up today!
Tell Your Loved Ones of Your Decision”
Australia, register at Australian Organ Donor Register
New Zealand, register at Organ Donation New Zealand
Canada - Ontario beadonor.ca
other Canadian provinces
South Africa, http://www.odf.org.za/
United States, donatelife.net
United Kingdom, register at NHS Organ Donor Register
Your generosity can save or enhance the lives of up to fifty people with heart, kidneys, liver, lungs, pancreas and small intestine transplants (see allotransplantation). One tissue donor can help by donating skin, corneas, bone, tendon, ligaments and heart valves
Has your life been saved by an organ transplant? "Pay it forward" and help spread the word about the need for organ donation - In the U.S. another person is added to the national transplant waiting list every 11 minutes and 18 people die each day waiting for an organ or tissue transplant. Organs can save lives, corneas renew vision, and tissue may help to restore someone's ability to walk, run or move freely without pain. Life Begins with You.
Posted by Merv Sheppard at 7:00 PM