A heart for his community 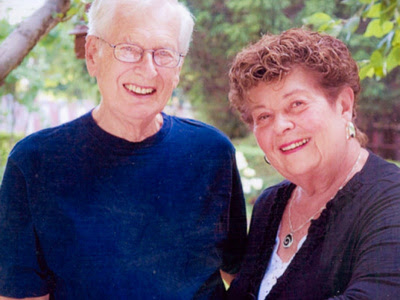 Ian Naismith and his wife Shirley. He lived 22 years after his heart transplant.
By Daniel Nolan, thespec.com

Ian Naismith had heart in more ways than most.

A community volunteer in Dundas, Ontario particularly with the 7th Dundas Scouts which he and his wife Shirley founded in 1969, he was recognized jointly with his wife in 1992 as the town’s Citizen of the Year.

Naismith died Dec. 9, 2011 at the age of 79 of kidney failure at the Hamilton General Hospital, just shy of the 22nd anniversary of his heart transplant operation at University Hospital in London, Ont.

Shirley Naismith, 80, said the heart transplant for her husband gave the couple two more decades of good memories. She said her husband’s father had died of a heart attack at 58, about the same age her husband was when he got his new heart.

“We did a lot,” she said. “We went to Europe. We went to England three times.”

She said her husband never let his heart situation slow him down, but said he was lucky in the heart he received from a donor. She recalled her husband was at death’s door after a heart attack on Jan. 20, 1990, and was rushed by ambulance to London.

No hearts were available for transplant at the time and Naismith was given 24 hours to live. A young man, however, was killed in a skiing accident in Banff and he had agreed to donate his organs.

A team of doctors flew to Calgary to retrieve the heart. The victim’s rare blood type — A negative — and tissue type was a close match to Naismith.

“It’s a miracle to get someone’s heart as a match,” said Shirley. “Their blood types were almost like they were relatives.”

On the morning of Jan. 22, 1990, the heart of the young skier was transplanted into Naismith’s chest.

Naismith, a native of Newcastle, England, was the eldest of two sons born to Dr. John Dykes Naismith and his wife Dorothy. He came to Canada in 1955.

Naismith was first interested in working in agriculture and worked at an Aberdeen Angus farm owned by famous art collector and shipping magnate Lawrence T. Porter in St. Andrews East, Que. But his wife said he didn’t find it “was a very profitable thing to be into” and moved into metallurgy. He worked for two companies in Quebec — including one that built components for the Distant Early Warning Line (the DEW Line) in Northern Canada — and came to Dundas in 1964 to work at the Westinghouse plant on Longwood Road in west Hamilton. He retired from the plant, after it became Camco, in 1992.w

Naismith did find farm life profitable in one respect. He met his wife at the neighbouring Montreal Hunt Club and they married in 1958.

Naismith and his wife were awarded the Dundas Citizen of the Year award in 1992 for their extensive work with the 7th Dundas Scouts, Meals on Wheels, the Canadian Cancer Society, Information Dundas, the St. George’s Benevolent Society, a minor soccer league and St. James Anglican Church in Dundas.

“We didn’t even expect it,” recalled Shirley. “We were very honoured to have that.”

In 1993, the couple became active in a new national organ donor awareness program because of the young skier’s gift to Naismith.

Shirley said her husband was liked by everyone.

Naismith is survived by his wife Shirley, son Peter, 50, and son John, 43. He is also survived by his brother Hugh, nieces Suzanna and Michele and nephew Michael, all in Germany, and a cousin in Australia.


“You Have the Power to Donate Life – to become an organ and tissue donor Sign-up today!
Tell Your Loved Ones of Your Decision”
Australia, register at Australian Organ Donor Register
New Zealand, register at Organ Donation New Zealand
Canada - Ontario beadonor.ca
other Canadian provinces
South Africa, http://www.odf.org.za/
United States, donatelife.net
United Kingdom, register at NHS Organ Donor Register
Your generosity can save or enhance the lives of up to fifty people with heart, kidneys, liver, lungs, pancreas and small intestine transplants (see allotransplantation). One tissue donor can help by donating skin, corneas, bone, tendon, ligaments and heart valves
Has your life been saved by an organ transplant? "Pay it forward" and help spread the word about the need for organ donation - In the U.S. another person is added to the national transplant waiting list every 11 minutes and 18 people die each day waiting for an organ or tissue transplant. Organs can save lives, corneas renew vision, and tissue may help to restore someone's ability to walk, run or move freely without pain. Life Begins with You.
Posted by Merv Sheppard at 11:18 AM