This ground-breaking research in lung transplantation will have a global impact and I am very fortunate to have had the opportunity to see the initial lung perfusion technique being perfected using pig lungs. The senior scientist leading this research, Dr. Shaf Keshavjee, is the surgeon that performed my lung transplant more than 7 years ago and I am very pleased to report on this outstanding success. 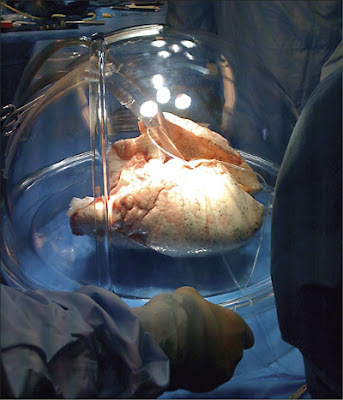 Scientists hope to reduce inflammation in lungs donated for transplantation by maintaining them in a special perfusion chamber and using gene therapy to administer interleukin-10. (Photo credit: Nathan Sulyma, RN/Toronto General Hospital)
FOR the first time in the world, transplant surgeons at Toronto General Hospital, University Health Network, Canada, used a new technique to repair an injured donor lung that was unsuitable for transplant, and then successfully transplanted it into a patient. They said the use of this technique could significantly expand the lung donor organ pool and improve outcome after transplantation. CHUKWUMA MUANYA writes with agency reports.
Chukwuma Muanya The Guardian

FOR the first time, scientists in the McEwen Centre for Regenerative Medicine, University Health Network, Canada, have successfully used gene therapy to repair injured human donor lungs, making them potentially suitable for transplantation into patients. This technique could significantly expand the number of donor lungs by using organs that are currently discarded, and improve outcomes after transplantation. 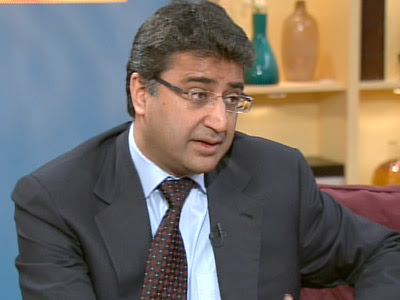 The technique was shown to be simple and effective in improving lung function. Their results, "Functional Repair of Human Donor Lungs by IL-10 Gene Therapy," are published in the October 28, 2009 edition of the journal Science Translational Medicine.

"This work is a big step in using regenerative strategies to repair injured lungs," says Keshavjee, who is also Director, Latner Thoracic Research Laboratories and Professor and Chair, Division of Thoracic Surgery at the University of Toronto. "For the first time, we hope to improve the health of donor lungs that we could not have used before by using gene therapy to decrease inflammation and repair cells before transplantation."

The process of gene therapy used on injured lungs will be carefully explained to the patients and, if they consent, the patients will be potentially transplanted with the repaired lungs should no other suitable donor lungs become available.

"This work opens the door for a variety of therapies that could potentially be applied to repair various injuries in other donor organs to improve the safety and outcome of transplants," adds Keshavjee.

Using a novel approach to overcome some of the challenges of gene therapy, the researchers first developed a strategy to preserve lungs at normal body temperature, with the lungs kept outside the body in a protective dome.

The Toronto XVIVO Lung Perfusion System continuously pumps a bloodless solution of oxygen, proteins and nutrients into injured donor lungs, mimicking normal physiological conditions. This makes it possible for the injured cells to begin repairing themselves, and also sets the stage for more sophisticated repair techniques to be applied to donor lungs.

Working with pig and then human donor lungs, which were unsuitable for transplantation, the researchers first placed the lungs on the Toronto XVIVO Lung Perfusion System to warm them to normal body temperature. Then, using a specially engineered adenovirus vector -- a common cold virus -- the researchers used a bronchoscope to inject the vector with an added IL-10 gene through the windpipe into the human lungs.

The study found that lungs maintained on the Toronto Lung Perfusion System alone, the control group, did not deteriorate and remained stable. However, the donor lungs that received the gene therapy, in addition to the ex vivo perfusion, significantly improved their function with regards to blood flow throughout the lungs and their ability to take in fresh oxygen and get rid of carbon dioxide. The boosted IL-10 effect lasts for up to 30 days in the lung.

The authors state that transplanting lungs which function better from the start would lead to more predictable, safer outcomes, shorter periods of mechanical ventilation and shorter intensive care unit stays for patients.

"It's as if gene therapy turbocharges each individual cell to manufacture many more proteins in its own IL-10 factory," explains Keshavjee, "This protein down-regulates or decreases the inflammatory potential of cells injured before and during the transplant process. It also has the capacity to turn down the recipient's immune system which rejects the transplanted organ."

The IL-10 gene is found normally in animal and human cells, and plays a role in inhibiting the immune response to infection or foreign materials such as transplanted organs. The researchers found that the lungs begin producing the new IL-10 anti-inflammatory proteins about six hours after insertion.

More than 80 per cent of potential donor lungs are injured and show inflammation during the process of brain death and intensive care related complications, and cannot be used for transplantation. Moreover, inflammation and organ rejection are the two main complications after transplant surgery.

"Everything we can do to prevent lung injury, especially in the first 72 critical hours after surgery, would have a significant impact on survival and quality of life after transplantation," notes Dr. Marcelo Cypel, a transplant surgical fellow at Toronto General Hospital who is the first author of the paper. Cypel adds that patients who have severe early lung injury are at greater risk of dying after surgery, and have higher rates of organ rejection later on.

It is estimated that the number of donor organs available for lung transplants could easily be doubled with this technique to treat and improve donor lungs.

Register to be a donor in Ontario or Download Donor Cards from Trillium Gift of Life Network. NEW for Ontario: recycleMe.org - Learn The Ins & Outs Of Organ And Tissue Donation. Register Today! For other Canadian provinces click here

Has your life been saved by an organ transplant? "Pay it forward" and help spread the word about the need for organ donation - In the U.S. another person is added to the national transplant waiting list every 11 minutes and 18 people die each day waiting for an organ or tissue transplant.

Posted by Merv Sheppard at 2:37 PM