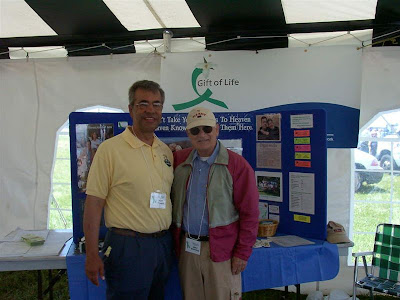 Kurt Penner, left , and Merv Sheppard at London Air Show, 6-27-04
(Click image for larger view)
Congratulations to my fellow lung transplant recipient Kurt Penner, who received his "gift of Life' at Toronto General Hospital in 2002 and has been selected from the millions who applied to be part of the Olympic Torch Relay. We were both patients at TGH and I met Kurt, his wife Lila and their family. We've been friends every since. We both have been advocates for organ and tissue donation since then, working with Trillium Gift of Life Network.

Kurt will carry the 37 inch and three-and-a-half pound torch on Sunday, December 27 in Woodstock, Ontario at 10 a.m. along Parkinson Road. This is one of the stops on the 27th as it makes it way from London, Ontario to the twin cities of Kitchener-Waterloo, Ontario.
Kurt and his family were volunteers at the 1988 Olympics in Japan and in 1998 they visited their son who was working at the Olympics there for CBC. Kurt has taken part in three transplant games and won several medals.
Kurt entered a RBC Bank contest where he had to submit an application and state how he would make the community and country a better place to live. Kurt said he wanted to continue to promote organ donation and improve lives within his community and also to honor his donor.

The Olympic Flame began its 45,000 kilometer (27,961 miles) journey across Canada, on October 30 in Victoria BC, visiting over 1000 communities and places of interest. Twelve thousand torchbearers will carry the Olympic Flame from coast to coast to coast in what is the longest relay held within the borders of any Host Country in history.

The relay will culminate at BC Place on February 12, 2010, with the lighting of the Olympic Cauldron, signaling the start of the Vancouver 2010 Olympic Winter Games.

See when the 2010 Olympic Torch Relay will be in your town.

Register to be a donor in Ontario or Download Donor Cards from Trillium Gift of Life Network. NEW for Ontario: recycleMe.org - Learn The Ins & Outs Of Organ And Tissue Donation. Register Today! For other Canadian provinces click here

Has your life been saved by an organ transplant? "Pay it forward" and help spread the word about the need for organ donation - In the U.S. another person is added to the national transplant waiting list every 11 minutes and 18 people die each day waiting for an organ or tissue transplant.

Your blog keeps getting better and better! Your older articles are not as good as newer ones you have a lot more creativity and originality now keep it up!