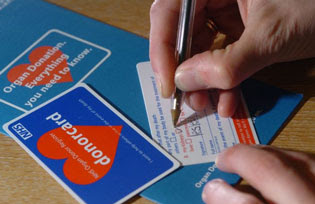 Scotland On Sunday reports that plans for a radical overhaul of organ donation laws which could save the lives of up to 500 Scots every year have taken a major step forward following the first formal talks between senior health officials from Scotland and England.

UK Health Secretary Alan Johnson is now "sympathetic" to the idea of a change in the law to an opt-out system of presumed consent, Scotland on Sunday can reveal. Read the article.

China buffs image with transplant rules
Glen McGregor writing in the Ottawa Citizen (Canada) reports that rocked by accusations of rights abuses, China is cracking down on organ trafficking. New regulations have made organs more rare and spurred a western-style campaign for education, donor cards and registries. Read the full article.

Pediatric Pulmonary Expert Comments on Study of Lung Transplants for Cystic Fibrosis
Commenting on a study of lung transplantation for children with cystic fibrosis, a leading pediatric pulmonologist calls the study “startling” in an editorial in this week’s New England Journal of Medicine that accompanies the study. He cautioned that physicians must be more judicious than ever in referring children with CF for lung transplants, considering the severity of the child's illness.

Newswise reports that Julian Allen, M.D., who holds the Robert Gerard Morse Endowed Chair in Pediatric Pulmonary Medicine at The Children’s Hospital of Philadelphia, analyzed the study by a University of Utah research team, which found that cystic fibrosis (CF) patients younger than age 18 did not survive longer after a lung transplant than CF patients who did not receive a lung transplant.

In contrast to a previous study by the same researchers, led by Theodore Liou, M.D., which found a survival advantage for adult transplant recipients when the predicted five-year survival rate without transplantation was 30 percent or worse, the new study found no lower threshold at which transplantation provided better survival in children—a finding that Allen called surprising.

“The study’s results make it clear that physicians must be more judicious than ever in referring children with cystic fibrosis for lung transplantation, with careful consideration of the severity of the child’s illness,” said Allen. He said that cystic fibrosis centers must provide appropriate social and psychological support to help families make the best choice for their children.

Allen added that it is possible that a lung transplant may improve a patient’s quality of life, as the current study had only limited information on that question. He urged that future studies of lung transplantation in CF patients ought to carefully measure quality of life as well as measuring how closely patients adhere to post-transplant medical treatments. Read the Newswise article.

Klasnic in emotional league return from kidney transplant
The Earth Times published this story about Ivan Klasnic, who is believed to have made history on Saturday as the first professional footballer to return to action from a kidney transplant. Klasnic, 27, was a starter for German Bundesliga club Werder Bremen at bottom side Energie Cottbus, playing 65 minutes in his team's 2-0 victory more than 11 months after his last match and eight months after the successful implant.

"It was just nice, so nice," said Klasnic, who almost scored early on. "I felt well and I think I played pretty well."

Athletes who returned to action after a kidney transplant in the past include New Zealand rugby star Jonah Lomu, US basketballer Alonzo Mourning and Italian weightlifting world champion Norberto Oberburger. But Klasnic is believed to be the first footballer to play with an implanted kidney. Read the story.

Posted by Merv Sheppard at 8:17 AM