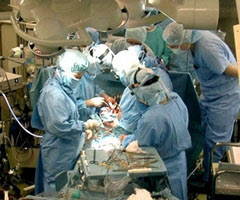 Here are a few slected organ donation and transplant headlines from around the world.

4 transplant recipients get HIV from donor
Donor's infection is 1st such case in U.S. in 22 years
The Chicago Tribune reports that four transplant recipients in Chicago contracted HIV from a high-risk organ donor whose infection went undetected in what hospital officials say is the first documented case of the virus being transmitted by organ donation in the U.S. in more than 20 years.

The transplants occurred in January at three Chicago hospitals, but the patients did not learn until the last two weeks that they were infected with HIV and the virus for hepatitis C. One doctor said the news was "devastating" to the patients.

Hospital and organ donation officials said the infections arose because of a rarely encountered flaw in the test used to detect those diseases -- a flaw that more sensitive tests could help fix, some experts believe. Official said there is no significant threat to other organ recipients, and no other patients received the infected donor's organs or tissue. read the full article.

Recipients of organ transplants hope to inspire would-be donors through their participation in the World Transplant Games
This BAngkok Post story talks about how an organ transplant has transformed recipients lives to the level of being able to participate in the recent World Transplant Games held in Thailand. The article goes on to note that the Games' primary aim is to provide people who have undergone an organ transplant with inspiration to engage in physical activity that will help them lead normal lives and they can start showing their families that they are able to do normal things again. read the full article.

The Human Organ Transplant (Amendment) Bill, would include Muslims as automatic organ donors unless they opt out of the scheme.

It will also give the Health Ministry more powers to investigate transplant-related offences like organ trading.

Public consultation was carried out in August and September this year with the Muslim community.

The main issues raised by participants were the desecration of the body by the removal of organs after death and the burial of an "incomplete" body.

Under the Human Organ Transplant Act (HOTA), kidneys, heart, liver and corneas can be removed for transplant.

Representatives from the Islamic Religious Council of Singapore (MUIS) emphasised that organ donation is allowed in the Islamic faith as it provides a means to save lives, and that other Muslim jurists and official fatwa bodies in numerous Islamic countries have similar views on organ donation.

Posted by Merv Sheppard at 7:44 AM