Selected headlines from around the world

Organ donation strenghtens family's bonds
From Iowa The Hawk Eye newspaper's web edition posted this article on Thanksgiving to remind us all how much we have to be thankful for and highlights the story of a daughter who donated a kidney to her mother. Now, her mother is waiting for a pancreas transplant also. Read the full story.

The Pakistani revelation: a commentary on the kidney transplant trade
The Daily Times of Pakistan has an eye-opening article on the buying and selling of organs in Pakistan and other countries. Included is a report on what authorities are trying to do about the practice and lists the goals they are trying to achieve. A must read.

Chance for say on opt-out organ donation
THE Welsh public will have a say on the controversial issue of “presumed consent” for organ donation, it was announced yesterday.
IC Wales has the following article about the government's decision to include the public in a consultation process before deciding to implement presumed consent. 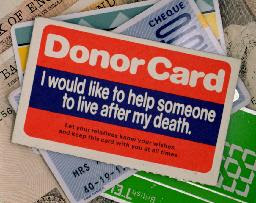 "At the moment organs can be taken for donation only when a patient has given explicit consent that they can be used in the event of their death.

But in a statement to the Welsh Assembly Government yesterday, Assembly Health Minister Edwina Hart announced a wide-ranging consultation on the matter and indicated she was in favour of a system whereby organs would be considered donated unless otherwise stated.

However she acknowledged that the decision to instigate such a system should be one chosen by the people of Wales and not the medical community." Read the full story.

There used to be just two choices when it came to organ donation, donate or don't donate. Now there is a third choice: donate to other donors who will return the favor. This choice is available through LifeSharers, the non-profit national organ circle. Members agree to donate their organs when they die. They also agree to offer their organs first to fellow members, if any member is a suitable match, before making them available to non-members. Everyone is invited to join the organ circle at LifeSharers.org or by calling 1-888-ORGAN88. There is no cost to join. Read the full article.

Posted by Merv Sheppard at 8:25 AM