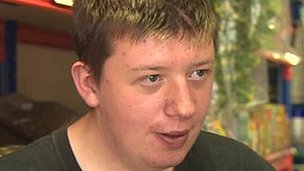 A teenager from West Yorkshire who suffers from a condition meaning his heart could stop at any time has turned down a possibly life-saving operation.
Liam Gawthorpe, 18, from Heckmondwike, who has a congenital heart defect, has told doctors he does not want a heart and lung transplant.
The teenager said he had seen too many people die after having undergone similar operations.
His father, Neil, said he was proud of his son's "phenomenal" decision.
"He knows what he wants to do and what he wants to be," said Mr Gawthorpe.
"He told the doctors, 'why mess with something that's still working? Let me just get on with life'."
'Sigh of relief'
Mr Gawthorpe said his son's condition meant the family was always worried about whether the teenager would survive another night.
Continue reading the main story

While the 18-year-old has undergone a number of operations over recent years, he recently told doctors he did not wish to undergo an operation to replace his heart and lungs.
Liam, who helps run the family's pet shop in Heckmondwike, said he had "seen too many people come and go" after a transplant.
"I just want to keep the business going and keep other people happy," he said.
His mother, Sharon, said she fully supported her son's decision not to have a transplant.
"He's happy with the life he's got and he says he's got enough to deal with without dealing with that as well.
"I'm happy with his decision and he just takes every day as it comes."
John Dark, professor of cardiothoracic surgery at Newcastle University and a member of the British Transplant Society, said the success of such operations was increasing.
"There is of course always a risk, especially if there has been previous surgery but the successful results of such operations are going up all the time."
“You Have the Power to Donate Life – Sign-up today! Tell Your Loved Ones of Your Decision”
Donor Registration Links