Being a lung transplant recipient with only one working lung to exist on, I'm probably super critical of second-hand smoke but it really bothers me. Last weekend at the local crowded farmer's market there were numerous people smoking cigarettes and pipes mingling throughout the crowds of adults and children. The smokers were oblivious to others around them and I guess they assumed it was their right. I congratulate those jurisdictions who have banned smoking in all public places and hopefully more will follow suit soon. 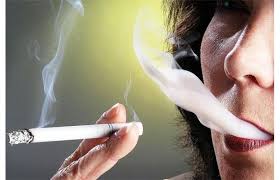 "Even if a patio is completely uncovered … smoking on a patio can generate very high concentrations of fine particles — those which penetrate deep into the lungs," Kennedy said.


CBC News
Anti-tobacco advocates are using a new study to make the case for a smoking ban on bar and restaurant patios.
A researcher at Johns Hopkins University in Baltimore, Maryland found harmful levels of second-hand smoke in a survey of Montreal bar patios.
The study found that a single lit cigarette could create air quality levels comparable to a smoggy day in Los Angeles.
Professor Ryan Kennedy, who conducted the study, says the tests suggests second-hand smoke can be harmful outdoors, even on a windy day.
"Even if a patio is completely uncovered … smoking on a patio can generate very high concentrations of fine particles — those which penetrate deep into the lungs," Kennedy said.
However, the president of the Quebec bar-owners union, Peter Sergakis, says he doesn't believe the study's findings.
He says he plans to commission his own research.
Sergakis says his businesses have not recovered after smoking was banned inside restaurants and bars in Quebec in 2006.
"When they stopped smoking inside, we lost about 25 per cent of the business," he said. "Our clientele is smokers and drinkers."

The provincial Tobacco Act is expected to be studied later this month by members of the government committee on health and social services.
David Lefebvre, spokesman for the Quebec council on tobacco and health, says advocates are hoping the study will be taken into consideration.
"The current act risks the health of employees who work on restaurant and bar patios, while it protects the office workers," Lefebvre said in a statement.
Several provinces have already banned smoking on patios, including Newfoundland and Labrador, Nova Scotia, and Alberta.

“You Have the Power to Donate Life – Sign-up today! Tell Your Loved Ones of Your Decision”
Donor Registration Links
Posted by Merv Sheppard at 8:29 AM