An international black market in organs — where brokers use deception, violence and coercion to buy kidneys from impoverished people, mainly in underdeveloped countries, and then sell them to critically ill patients in more affluent nations — is leaving a trail of victims around the world.

From the Seattle Times


About 5,000 people sell organs on the black market each year, according to Dr. Francis Delmonico, an adviser on transplants to the World Health Organization (WHO).

It's against the law to buy or sell an organ in every country except Iran, said Delmonico, president-elect of the Montreal-based Transplantation Society, which lobbies governments to crack down on illicit procedures. 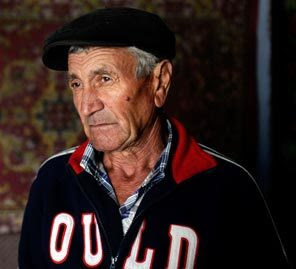 Vasile Diminetz, a retired farmer, said his son, Vladimir, grew ill after a broker bought his kidney in Turkey for $2,000 in 1999. Vladimir died in 2003 at 25, after his remaining kidney failed, according to the Renal Foundation of Moldova, which has documented dozens of cases of organ trafficking. Photo: DIANA MARKOSIAN / BLOOMBERG
BABRUJSK, Belarus — Aliaksei Yafimau shudders at the memory of the thug who threatened to kill his relatives. Yafimau, who installs satellite-TV systems in Babrujsk, answered an ad in 2010 offering money to anyone willing to sell a kidney.

He saw it as a step toward getting out of poverty. Instead, Yafimau, 30, was thrust into a global journey that had him, at one point, locked in a hotel room for a month in Quito, Ecuador, waiting for surgeons to cut out an organ.

The man holding Yafimau was Roini Shimshilashvili, a former kick-boxer who was an enforcer for an international organ-trafficking ring, according to evidence gathered by police in Kiev, Ukraine. Yafimau said that when he pleaded to be let out of the deal, Shimshilashvili issued a threat: "He said if I didn't go through with it, he would leave me in Ecuador and kill my family," Yafimau said.

Doctors removed Yafimau's left kidney in July 2010 and transplanted it into an Israeli woman, according to the Kiev police investigation.

On the plane back to Belarus, on the western border of Russia, Shimshilashvili told Yafimau that if he wanted to live, he shouldn't talk to police.

"I am afraid for my life," said Yafimau, standing outside his mother's Babrujsk apartment building, a nine-story edifice surrounded by weeds and trash.

The traffickers paid Yafimau $10,000. He said it wasn't worth the fear that haunts him today.

Yafimau is one of the victims in a sprawling global black market in organs, in which brokers use deception, violence and coercion to buy kidneys from poor people, mainly in underdeveloped countries, and then sell them to critically ill patients in more-affluent nations.

The middlemen form alliances with doctors in leading hospitals who do these transplants for a fee, no questions asked.

Global organ trafficking is on the rise, as desperate people seek transplants in a world that doesn't have enough donors.

About 5,000 people sell organs on the black market each year, according to Dr. Francis Delmonico, an adviser on transplants to the World Health Organization (WHO).

It's against the law to buy or sell an organ in every country except Iran, said Delmonico, president-elect of the Montreal-based Transplantation Society, which lobbies governments to crack down on illicit procedures.

Many of the black-market kidneys harvested by these gangs are destined for people who live in Israel. With a generally well-educated population of 7.4 million and a modern medical system, Israel has an acute shortage of organs.

Just 12 percent of Israelis are registered donors, meaning they have consented to let their organs be used for transplants after they die, according to the Israeli National Transplant Center. That compares with 40 percent of Americans.

Delmonico, a professor of surgery at Harvard Medical School, has spent the past six years lobbying governments and doctors around the world to combat organ trafficking. He said Israel's government is cracking down.

The Knesset, Israel's legislative body, passed the Organ Transplant Law in 2008, setting penalties, including imprisonment of up to three years, for buying and selling organs and requiring hospitals to scrutinize transplants by nonrelatives and foreigners. The government also banned insurers from paying for most transplants outside Israel.

"The criminal here is the middleman who profits from the sick and the poor," said Bahat, who investigated an organ-trafficking ring in Jerusalem. "It touches my heart that people will sell part of their body because they need money to live."

People have two kidneys that filter toxins out of the bloodstream. A patient with failure in both kidneys will die quickly unless he or she is hooked up to a dialysis machine or gets a transplant.

Investigators on five continents say they have uncovered intertwining criminal rings run by Israelis and Eastern Europeans that move people across borders — sometimes against their will — to sell a kidney.

Criminals see an opportunity to make big money in the organ trade, where they can sell a kidney for 15 to 20 times what they pay, police throughout Europe say.

Traffickers prey on the most vulnerable people. Moldova, the poorest country in Europe, is one of their prime hunting grounds.

Dorin Razlog, a shepherd with an eighth-grade education who lives in Ghincauti, said recruiters for a trafficking ring told him cash for a kidney would lift him out of poverty. After doctors in Istanbul, Turkey, cut out the organ in August 2002, they paid him $7,000: $3,000 less than they'd offered. Of that, $2,500 was in counterfeit bills, he said.

"They told me they would send people to destroy my house and kill my family if I went to the police," Razlog, 30, said.

Today, the money is long gone, and he sleeps on a musty mattress inside the rusting hulk of an abandoned Russian van.

At the end of some days, Razlog said, he's writhing from pain in his remaining kidney.

"The only way out is death," he said.

In Mingir, Moldova, the organ black-market cost a man his life. Vasile Diminetz, a retired farmer, said his son, Vladimir, grew ill after a broker bought his kidney in Turkey for $2,000 in 1999.

Vladimir died in 2003 at 25, after his remaining kidney failed, according to the Renal Foundation of Moldova, which has documented dozens of cases of organ trafficking.

Prosecutors in nine countries have been conducting criminal probes of organ trafficking involving Israeli patients since 2003. The largest case dates to that year, when the Brazilian Federal Police noticed people from two slums of Recife, a coastal city 1,311 miles from São Paulo, flying to Durban, South Africa.

In November 2010 in Durban, Netcare — South Africa's largest hospital company — pleaded guilty to violating the Human Tissue Act, which bans buying and selling organs. It admitted to allowing 92 transplants in which donors from Brazil, Israel and Romania sold kidneys to Israeli patients. Four doctors are awaiting trial on trafficking charges.

In Kosovo, Jonathan Ratel, who has dual citizenship in Canada and Great Britain and was appointed by the European Union to help restore the country's criminal-justice system, is overseeing a pivotal organ-trafficking case. It includes participants and victims from Belarus, Moldova, Turkey and four other countries.

Ratel said he's stunned by the callousness of the criminals who run the organ rings. Traffickers in Kosovo threatened one kidney seller with death if he testified, so the court had the man put into a witness-protection program.

"This is organized crime," Ratel said. "There is significant coercion and threats of violence."


“You Have the Power to Donate Life – to become an organ and tissue donor Sign-up today!
Tell Your Loved Ones of Your Decision”
Australia, register at Australian Organ Donor Register
New Zealand, register at Organ Donation New Zealand
Canada - Ontario beadonor.ca
other Canadian provinces
South Africa, http://www.odf.org.za/
United States, organdonor.gov
United Kingdom, register at NHS Organ Donor Register
Your generosity can save or enhance the lives of up to fifty people with heart, kidneys, liver, lungs, pancreas and small intestine transplants (see allotransplantation). One tissue donor can help by donating skin, corneas, bone, tendon, ligaments and heart valves
Has your life been saved by an organ transplant? "Pay it forward" and help spread the word about the need for organ donation - In the U.S. another person is added to the national transplant waiting list every 11 minutes and 18 people die each day waiting for an organ or tissue transplant. Organs can save lives, corneas renew vision, and tissue may help to restore someone's ability to walk, run or move freely without pain. Life Begins with You
Posted by Merv Sheppard at 8:00 AM