The parents of a baby girl who was placed right at the top of an emergency transplant list have spoken of their amazement after her heart healed by itself. 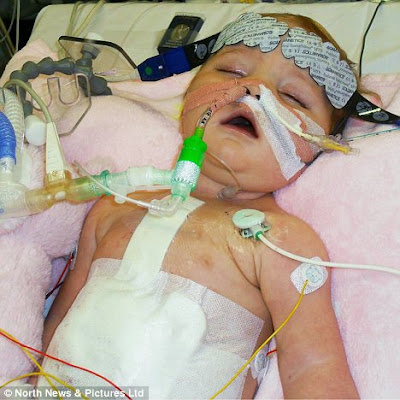 Scarlett Ungurs, became desperately ill when a virus struck when she was six months old and left her with dilated cardiomyopathy - an enlarged heart.

She was placed at the top of the emergency heart transplant list for the country and on August 17 this year, she suffered a cardiac arrest.

Surgeons carried out a seven-hour operation put her on a Berlin Heart just days after her heart attack.

Scarlett, of Seaton Delaval, Northumberland, was hooked up to the 'artificial heart' which helped the left side of her heart pump blood around her body.

But, amazingly, her heart began to heal by itself as the life-saving equipment took the strain. Doctors believe that she is one of just 20 other children in the world who have seen their heart recover after the critical care and her parents had been told to expect the worst before her miracle recovery.

Scarlett's dad Darren, who was forced to leave his telemarketing job during Scarlett's treatment, said: 'She's our warrior. She's been through so much in her short life and she keeps battling back.

'She wouldn't give up and she's incredible.'

Darren, 31, and his partner, Ashleigh Leybourne, had moved to Tenerife and were working in bars when they discovered Ashleigh was pregnant.

They returned to the UK and Scarlett was born on December 4 weighing 8lb 8oz. But in July she was admitted to hospital after doctors diagnosed her with cardiomyopathy.

She was placed on life-saving medication before the couple received a call at 3.30am on August 17 to be told their daughter's health had deteriorated.

But after spending six weeks in the Children's Heart Unit at the Freeman Hospital, her heart began to heal on it's own and doctors carried out a 'stress test' to ensure her heart was strong enough.

And they then carried out a second seven-hour operation to remove the artificial heart. She now faces weekly trips to hospital where doctors will test her heart.

Yesterday, the 11-month-old youngster has returned back to her home and next month will celebrate her first birthday. 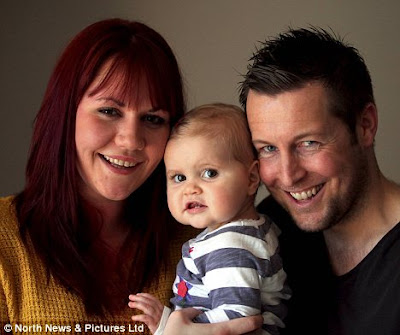 'We feel so lucky': Scarlett with her parents Ashleigh Laybourne and dad Darren Ungurs
Mom Ashleigh, 26, a receptionist, said: 'I couldn't believe it, I was physically sick when they told me.

'She was so fat when she was born and I thought she was so healthy.


“You Have the Power to Donate Life – to become an organ and tissue donor Sign-up today!
Tell Your Loved Ones of Your Decision”
Australia, register at Australian Organ Donor Register
New Zealand, register at Organ Donation New Zealand
Canada - Ontario beadonor.ca
other Canadian provinces
South Africa, http://www.odf.org.za/
United States, organdonor.gov
United Kingdom, register at NHS Organ Donor Register
Your generosity can save or enhance the lives of up to fifty people with heart, kidneys, liver, lungs, pancreas and small intestine transplants (see allotransplantation). One tissue donor can help by donating skin, corneas, bone, tendon, ligaments and heart valves
Has your life been saved by an organ transplant? "Pay it forward" and help spread the word about the need for organ donation - In the U.S. another person is added to the national transplant waiting list every 11 minutes and 18 people die each day waiting for an organ or tissue transplant. Organs can save lives, corneas renew vision, and tissue may help to restore someone's ability to walk, run or move freely without pain. Life Begins with You
'The feeling was horrific, I wouldn't wish it on anyone. She was struggling to breathe so we just took her to the GP.

'We went to the hospital and one of the doctors had just finished their placement on the Children's Heart Unit. It was him who spotted what was wrong.

'We feel so lucky, we've got a lot to thank him for.

'Because the condition is so rare we were a bit scared. I didn't think she would get through it - I though she might die. But then she went on the heart machine and her heart started to mend itself.'

Darren added: 'The doctors and surgeons were just unreal. They saved her life and I would give them mine. They work 24-hour shifts and then leave but never expect any gratitude.

'We also owe a lot to the staff on Ward 23 - if you ask them any questions then they are always there to help.

'She had six months of being healthy and that's worked in her favor. Had she been ill from birth it might have been a different story.

'We wouldn't accept how ill she was. Now she's been released we're just terrified.

'A lot of people think she's completely fine but we know she's still got a long way to go.
Posted by Merv Sheppard at 10:30 AM