There's quite a controversy over the use of medical marijuana and you can compare your thoughts on the subject with the many readers who commented in the original post. 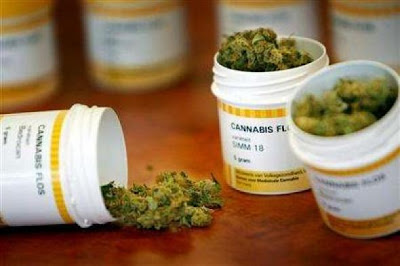 By Lauren Lloyd laist.com
Doctors at Cedars-Sinai Medical Center removed a cancer patient from the liver transplant list in February for using medical marijuana and failing to show up for a drug test. Last week the 63-year-old patient, Norman Smith, asked the medical center to reconsider reinstating him.

Smith has been fighting inoperable liver cancer for two years and is in need of a new liver. He scored a spot on the transplant list last year but was removed after the drug test incident. Toke of the Town said Smith did test positive for medical marijuana. Cedars-Sinai transplant policy states that patients are still eligible for a transplant if they initially test positive for marijuana, but they must sign a statement promising not to use the drug. If they fail a random drug test or, like Smith, are a no-show for a test, they are bumped from the list. In order to be placed back on the list, Smith was ordered to abstain from using medical marijuana for six months, submit to random drug tests and undergo counseling.

Smith, who is currently undergoing chemotherapy and radiation, told L.A. Now, "It's frustrating. I have inoperable cancer. If I don't get a transplant, the candle's lit and it's a short fuse." His cancer recently returned after being in remission.

Joe Elford, an attorney with the medical marijuana advocacy group Americans for Safe Access, represents Smith and says that any delay in the transplant could be the "difference between life and death." Smith and Elford are considering a lawsuit against the hospital.

L.A. Now says that, according to the United Network for Organ Sharing, there is no standard policy on transplants and the use of medical marijuana. Due to the high demand for liver transplants nationwide, medical centers must prioritize. Over 16,000 people are on the national wait list for liver transplants. The average wait is approximately 300 days.

Dr. Goran Klintmalm, chief of the Baylor Regional Transplant Institute and an expert in liver transplantation, said, "As long as we have patients who die on the list waiting for organs... is it right to give [to] patients who have a history of drug use?"

One of the main concerns with granting a medical marijuana user a transplant is whether or not the patient will follow the complicated medication regimen post-transplant. Dr. Jeffrey Crippin, former president of the American Society of Transplantation and medical director at Washington University in St. Louis, claims, "If you are drunk or high or stoned, you are not going to take your medicine."

Cedars-Sinai spokeswoman Sally Stewart told L.A. Now that medical marijuana users can be exposed to a species of mold that can cause fatal disease among patients with weak immune systems. Patients are also susceptible to a fatal lung infection post-transplant. Stewart added that the center does not "make a moral or ethical judgment about people who are smoking medical marijuana" and that their "concern is strictly for the health and safety of our patients."

Dr. Steven A. Miles, Smith's oncologist, said, "Without a transplant, it is basically 100% fatal. It's just a matter of time."

Americans for Safe Access Chief Counsel Joe Elford wrote in a letter to Cedars-Sinai, "Cedars-Sinai would not be breaking any laws, federal or otherwise, by granting Norman Smith a liver transplant, and it's certainly the ethical thing to do."

Smith said he started using medical marijuana while suffering "extreme pain" and "physical anguish" after an unrelated back surgery. Miles approved of his patient's medical marijuana use to manage his pain plus the effects of chemotherapy and refilled Smith's medical marijuana prescription. Smith stopped using the drug in August and is hopeful for a liver transplant.


“You Have the Power to Donate Life – to become an organ and tissue donor Sign-up today!
Tell Your Loved Ones of Your Decision”
Australia, register at Australian Organ Donor Register
New Zealand, register at Organ Donation New Zealand
Canada - Ontario beadonor.ca
other Canadian provinces
South Africa, http://www.odf.org.za/
United States, organdonor.gov
United Kingdom, register at NHS Organ Donor Register
Your generosity can save or enhance the lives of up to fifty people with heart, kidneys, liver, lungs, pancreas and small intestine transplants (see allotransplantation). One tissue donor can help by donating skin, corneas, bone, tendon, ligaments and heart valves
Has your life been saved by an organ transplant? "Pay it forward" and help spread the word about the need for organ donation - In the U.S. another person is added to the national transplant waiting list every 11 minutes and 18 people die each day waiting for an organ or tissue transplant. Organs can save lives, corneas renew vision, and tissue may help to restore someone's ability to walk, run or move freely without pain. Life Begins with You.
Posted by Merv Sheppard at 8:00 AM