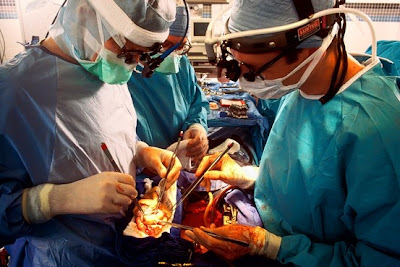 By Pauline Tam, The Ottawa Citizen
OTTAWA — A long-term study of Canadian heart-transplant patients has found that survival rates have improved markedly, with the biggest gains being made within the past 10 years.

The study, which followed 461 patients at the University of Ottawa Heart Institute since 1984, found that as a result of medical advances over the past decade, nine out of 10 transplant patients now live longer than eight years.

The younger the patient at the time of the transplant, the more likely they are to live longer, the study concluded.

Dr. Marc Ruel, the study’s author, attributed the gains to improved pre-surgical and post-operative care, including the advent of anti-coagulant drugs that permanently thin a patient’s blood, removing the risk of life-threatening clots.

Patients are also being kept alive longer due to the improved management of organ rejection and infection following surgery.

The results of the study were presented Monday at the Canadian Cardiovascular Congress in Vancouver.

Among the heart-institute patients who received transplants over the 25-year study period, nine out of 10 were still alive one year after they received a donated heart. An estimated eight out of 10 patients were alive five years later, six out of 10 a decade later and more than a third lived to see 20 years.

An international heart-transplant registry found that nearly seven out of 10 patients are still alive seven years after surgery, so the heart institute results compare favourably.

The oldest person to receive a donated heart during the study period was 74, and the youngest was three.

Transplants can be done after the age of 65 with good results, but doctors carefully screen patients to avoid those with significant kidney or liver illnesses that could compromise lifespan or quality of life, said Ruel.

Patients are considered candidates for transplant if they have exhausted all other available therapies and have less than a year to live. Nearly half of all transplant patients have heart failure due to some kind of genetic defect; the other half are patients who have survived multiple heart attacks and are living with end-stage heart disease.

An estimated 500,000 Canadians live with heart failure and 50,000 new patients are diagnosed each year. Last year, 167 Canadians received new hearts, while another 135 were on the waiting list.

Modern heart transplantation became available in 1980. Since then, survival rates have improved to the point where for every 10 transplants performed, two more patients survive longer than a decade, the study found.

The leading cause of death following a transplant is a condition called vasculopathy, a form of chronic rejection that narrows the blood vessels of the transplanted heart.


“You Have the Power to Donate Life – to become an organ and tissue donor Sign-up today!
Tell Your Loved Ones of Your Decision”
Australia, register at Australian Organ Donor Register
New Zealand, register at Organ Donation New Zealand
Canada - Ontario beadonor.ca
other Canadian provinces
South Africa, http://www.odf.org.za/
United States, organdonor.gov
United Kingdom, register at NHS Organ Donor Register
Your generosity can save or enhance the lives of up to fifty people with heart, kidneys, liver, lungs, pancreas and small intestine transplants (see allotransplantation). One tissue donor can help by donating skin, corneas, bone, tendon, ligaments and heart valves
Has your life been saved by an organ transplant? "Pay it forward" and help spread the word about the need for organ donation - In the U.S. another person is added to the national transplant waiting list every 11 minutes and 18 people die each day waiting for an organ or tissue transplant. Organs can save lives, corneas renew vision, and tissue may help to restore someone's ability to walk, run or move freely without pain. Life Begins with You
Posted by Merv Sheppard at 8:13 AM

Please keep it up because without the internet is definitely lacking in intelligence.

Great information its really very interesting and i amazed to read this post.
Thanks for sharing