Girl, 9, who was youngest to have double lung transplant dies

dailymail.co.uk
A schoolgirl who became the youngest person in the world to undergo a double lung transplant four years ago has died.

Mariam Imran was just five when she underwent the life-saving operation - but a year ago her body began to reject the organs.

Shortly before her death, the nine-year-old told mother Faaiza Dar: 'I'm not scared of dying, mummy, but I'm scared of leaving you'. 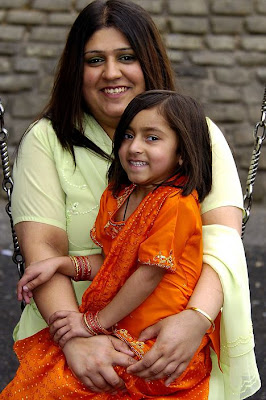 Mariam with her mother Faaiza Dar in 2007: Doctors said Mariam's body began rejecting the organs in September last year
Ms Dar, 29, said: 'I was in shock when she died. She went so peacefully, she didn't scream, she wasn't in pain.

Mariam from Blackburn in Lancashire, had cystic fibrosis - a hereditary condition that affects the respiratory and digestive systems, when she was three-months-old.

Following the double transplant in January 2007, Mariam led a normal life but by September last year, doctors told her parents their daughter's body had begun to reject the organs.

Sessions of radiation therapy to slow down the deterioration failed and last month Mariam, who is an only child, developed breathing difficulties. She was taken to hospital where for the first time she told her father Imran Khalid that she was 'not fine'.

Ms Dar said they were offered another transplant but decided to decline for their daughter's sake.

'After nine-and-a-half years of fighting there comes a point where the body and mind can't take much more. She was my life, she suffered enough and there has to be a cut off point on what someone can take. It was the hardest decision of my life.

'She never complained, but had said "mama, why can't I be like my nieces?" I told her she was special and explained that if it wasn't her that was ill it could be someone else.

'And she said she wouldn't wish it on anybody else - she was a very, very wise girl.'

She went on: 'Mariam had a short life but I could have lost her four-and-a-half years ago.

'She had so much fight. Mariam was aware of her condition and the of amount medication she was taking.

'At one point she was quite ill and couldn't breathe and said "I'm dying, I'm dying". I asked her what they felt like and she said she could see a white light and said that God was calling her.

'I told her about what we believe and she told me that she was more scared of leaving me by myself.

Ms Dar added: 'She was an amazing girl. She left her mark wherever she went. She had a cheeky smile and you would always leave with a big smile on your face after speaking to her.

'She left such an impression on people's lives. She was bubbly, funny and moody like her mother but she knew how to wrap people around her little finger.

'I'm empty and I look around and expect her to call for me.'

'You don't think you'll ever need to know about these things. But people need to have the issues around organ donation highlighted,' she said.

Black and Asian people are three times more likely to need a kidney transplant than those from other ethnic origins. But they make up less than two per cent of deceased donors.

A spokesman for UK Transplant, said: 'We need people to talk about their wishes for organ donation and join the register.'

In May this year, doctors at the Great Ormond Street Hospital in London performed a double lung transplant on an even younger child.

Mason Lewis, from Atherstone, Warwickshire, was just four when he had the operation.

“You Have the Power to Donate Life – Sign-up today! to become an organ and tissue donor
Tell Your Loved Ones of Your Decision”
Australia, register at Australian Organ Donor Register
New Zealand, register at Organ Donation New Zealand
Canada - Ontario beadonor.ca
other Canadian provinces
South Africa, http://www.odf.org.za/
United States, organdonor.gov
United Kingdom, register at NHS Organ Donor Register
Your generosity can save or enhance the lives of up to fifty people with heart, kidneys, liver, lungs, pancreas and small intestine transplants (see allotransplantation). One tissue donor can help by donating skin, corneas, bone, tendon, ligaments and heart valves
Has your life been saved by an organ transplant? "Pay it forward" and help spread the word about the need for organ donation - In the U.S. another person is added to the national transplant waiting list every 11 minutes and 18 people die each day waiting for an organ or tissue transplant. Organs can save lives, corneas renew vision, and tissue may help to restore someone's ability to walk, run or move freely without pain. Life Begins with You
Posted by Merv Sheppard at 9:50 AM