Please, buy my kidney to secure her future 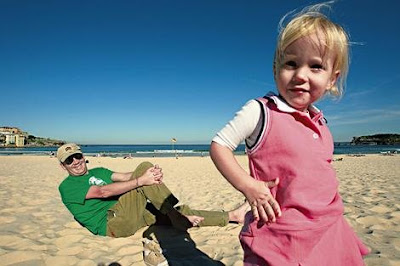 One kidney for sale … Craig Gill and his two-year-old daughter Petal, the reason he is willing to sell an organ, on Bondi Beach (Australia) yesterday.
Photo: Peter Rae

An Australian physician's suggestion that the government pay $50,000 to living donors for expenses and lost wages was shot down in a hurry by critics who came back with their own suggestion of paying up to $6,000 for lost wages. In Ontario, Canada where I live the Provincial Government has recently initiated a Program for Reimbursing Expenses of Living Organ Donors (PRELOD). You can read more about this at Trillium Gift of Life Network.

The costs associated with being a living donor can be prohibitive and this is the main reason many are reluctant to become a living donor. I personally know a living liver donor whose costs for expenses and lost wages came to $25,000.

From The Sydney Morning Herald in Australia:

CRAIG GILL took "less than 30 seconds" to decide that he would sell his kidney to finance ballet lessons and a home deposit for his two-year-old daughter, Petal.

After reading yesterday's Herald on the call by a Canberra specialist to legalise the sale of kidneys in Australia, Mr Gill, 44, called the paper, seeking to place an advertisement for one of his kidneys for $50,000.

"My daughter is my future and I am willing to put my hand up and sell an organ to someone to help her," he said. "A cheque for $50,000 would help her to avoid Sydney's rental crisis when she's older. I don't want my girl out on the street fighting with hundreds of others for somewhere to live.

"If a relative needed a kidney from me, I'd give it to them without a second thought, but when it comes to strangers, I want to be well compensated for it because my priority is my daughter and her future. And I would say most of my friends feel the way I do - we'd do anything to help our kids get a start in life."

The federal minister for Health, Nicola Roxon, ruled out legalising organ sales. And the medical director of Kidney Health Australia, Tim Mathew, said cash for kidneys would be exploitative and unethical, and would never win community support. However, he said giving donors up to $6000 for loss of earnings after surgery should be considered - an idea backed by the Australian Medical Association last night.

"I know there are people out there who desperately need body parts, but for me, commercial trading in organs is unfair, inequitable and goes against everything I believe the Australian culture and Australian health system to be," Dr Mathew said. "I do believe, though, that people should be compensated for the time and effort that goes into donating a kidney."

The suggestion of compensation surprised Gavin Carney, the nephrologist campaigning for commercial kidney trading to help patients who wait years for transplants or even travel to Third World countries to buy organs.

"[Kidney Health Australia] was not supportive of my plan yesterday, but today they want to give donors money," Dr Carney said. "It just proves my point that it is becoming blindingly obvious that we need to put a dollar mark on organ donations to solve this problem. Most people, even though they want to help others, cannot afford to take six weeks off work. Six thousand dollars or $50,000 - it's all a payment and that's what we need to increase organ donation in this country."

But Ms Roxon said: "We know this really could put people at risk of being exploited and we are not going to let this happen."

She said urgent action was needed to boost organ donations. After years of attempts to increase organ donation, numbers have declined in recent years. There were 202 in 2006 but only 198 last year.

A national clinical taskforce has said it should be possible to increase donations by 370 a year. It suggested a campaign to dispel myths about donation, nationally accepted methods to identify potential donors in emergency departments and intensive care units, and a national donation and transplantation authority.

lovely_evey said...
This comment has been removed by the author.
3:28 PM

i want to donate a kidney or part liver,0 positiv very healt!shuster1985@yahoo.com!thanks

Good day, sun shines!
There have were times of hardship when I didn't know about opportunities of getting high yields on investments. I was a dump and downright stupid person.
I have never thought that there weren't any need in large initial investment.
Nowadays, I feel good, I begin take up real money.
It gets down to select a correct companion who utilizes your money in a right way - that is incorporate it in real deals, parts and divides the profit with me.