After heart transplant, John Hieta had a full life 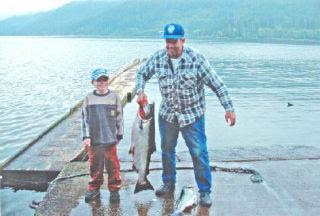 John Hieta loved to go fishing with his grandkids. Here he holds up a monster salmon he and grandson John caught on a recent trip.
Photo Courtesy of the Hieta family

From BC Local News.com:

“When he had the transplant he became a different kind of person, he took life one day at a time and he didn’t let things bother him. I think he enjoyed life more.”

By Doug Marner - Lake Cowichan Gazette
John Hieta always believed that every day after December 15, 1996 was a gift to him because of a heart transplant he received.

Hieta sadly passed away on May 17 at age 65, but his family said he was grateful for the extra years he had.

“He always said he could die tomorrow and it would be okay,” said Rod Peters, Hieta’s brother-in-law and fishing buddy.

One of the greatest joys for Hieta was his grandchildren, three who were born after his heart transplant. Every weekend during the hockey season you would see John and Joan, his wife, at the arena watching their grandsons play hockey.

“He really doted his grandchildren,” said Peters. “He was always at their ball games and hockey games and he took them fishing whenever he could.”

Hieta was born in Duncan on September 16, 1942 and he grew up in Youbou, where his father worked at the lumbermill. He eventually worked at the same sawmill and became head sawyer before he went on compensation for his back.

He was a longtime member of the Lake Cowichan Fire Deparment and became a lifetime member.

In the early fall of 1996, Hieta went to the hospital because of what he thought was his bad back acting up. It was, in fact, a serious heart attack. Doctors told him there were major blockages in his heart that created dead muscle tissue. A transplant was the only way to help him have as normal a life as possible.

The transplant went so well, Hieta was back home 10 days after the surgery, on Christmas Day.

Hieta always urged people to fill out an organ donor card because there is always a waiting list of patients who need an organ. For more information on organ donation, go to BC Transplant.

“When he had the transplant he became a different kind of person,” said Peters. “He took life one day at a time and he didn’t let things bother him. I think he enjoyed life more.”

Enjoy life he did, going fishing or hunting whenever he could, travelling with Joan to places like Finland, where his family comes from, and spending time with his grandkids.

A celebration of John Hieta’s life was held at Rod and Karen Peters’ house last Thursday, with more than 200 people attending. In lieu of flowers, donations can be made to the cystic fibrosis trust fund at the Island Savings Credit Union in Lake Cowichan.

Posted by Merv Sheppard at 9:27 AM