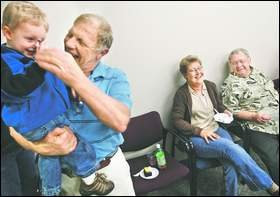 From the Iowa City Press-Citizen:

'It's been wonderful'
Diana Bauman couldn't even go to her mailbox without feeling like she'd just run a marathon.

The 57-year-old Grinnell resident had been dealing with lung problems for 10 years. Five of those were spent with an oxygen machine at her side.

"I couldn't go anywhere without it," she said.

Eventually, her condition deteriorated to the point where a doctor in Grinnell told her she needed a lung transplant. The closest place to get one was in St. Louis, he told her.

Bauman said she refused to leave her family during the lengthy recovery process. Then the doctor told her about an up-and-coming program at University Hospitals, the only one in Iowa.

She went and was the first patient to get a lung transplant at University Hospitals in 12 years. Both of her lungs were replaced with donor organs.

On Thursday, Bauman came to University Hospitals for her one-year checkup -- and was surprised with cake and punch by hospital staff and a dozen family members.

"I was totally surprised," she said.

University Hospitals has performed eight lung transplants since re-opening its program a year ago, said Jana Beaver, a lung transplant coordinator who worked with Bauman.

Beaver said patients who might be candidates for a transplant go through numerous tests to make sure they are healthy enough to undergo the surgery, but sick enough that, without the transplant, they'd soon die.

"The surgery itself comes with a significant mortality risk," she said.

University Hospitals performed lung transplants from 1988 to 1996 but had to stop after a surgeon left the hospital, Klesney-Tait said.

Because the transplant requires a lot of specialized care, she said the United Network for Organ Sharing requires a team of people, including surgeons, nurses and pharmacists, to keep a center open. Without one, a hospital's lung transplant center closes, Klesney-Tait said.

When Bauman was looking for a place to get her transplant, University Hospitals recruited the surgeon it needed to open a lung transplant program, Kalpaj Parekh.

"We're very excited to have the program," Klesney-Tait said. "It's very rewarding."

Bauman said after her surgery she had to learn to breathe again without the help of an oxygen machine. But through the past year, she said her health has improved greatly. She's taken trips to Florida and Wisconsin.

"I can get out and mow the yard, I can play with my grandkids -- it's been wonderful," Bauman said.

Posted by Merv Sheppard at 9:49 AM