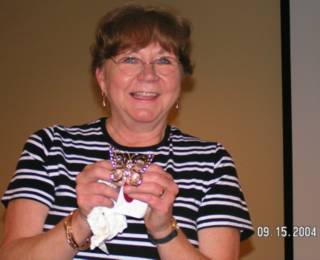 The conference room was jam packed yesterday as lung transplant recipients, their spouses and support people, along with many friends and hospital staff, gathered to honor Jeannie Haines, Psychiatric Nurse for the Lung Transplant Program at Toronto General Hospital in Toronto, Canada.

There was so much love in the room for Jeannie that I can still feel it now. I never had an opportunity to interact with Jeannie other than socially at a few meetings or when I ran into her in passing at the hospital, so I did not know the depth of love, feeling and emotion that people had for Jeannie until I heard some of their tributes. I knew something special was happening when so many people showed up. Some even drove more than 100 miles to be there.

These can be very, very stressful times. Jeannie has always been there to give comfort and support, to listen, to give advice and to be available at all times. When one is diagnosed with a fatal lung disease and told they will soon die without a lung transplant, it is devastating; not only for the patient but for their family and friends as well. Mostly patients are told it's only a matter of a year or two and not much more than that.

Jeannie Haines has always been there as someone to turn to for a comforting and reassuring voice, not only for the patient but for their families and loved ones.

Jeannie has gone out of her way to visit patients in their hospital rooms, after her own working hours on numerous occations, and called them or their supports at home just to see how they were doing and to be there for them. She has helped so many patients and their support people it would probably take many pages to list them all.

But I did manage to take quite a few pictures at the reception and hopefully they will give you an idea of the love I'm talking about. I intend to re-name or caption the photos to identify everyone over the next few days but meanwhile you can browse to "Jeannie" at http://photos.yahoo.com/mervsheppard@rogers.com

Posted by Merv Sheppard at 7:47 PM