The Waterloo woman waited 14 months for a double-lung transplant, her chances looking bleak if she didn’t get a match soon.

Now 34 months have passed since Dubeau got her new lungs.

“I was only given three months to live, so that’s why I’m still counting now,” she said.

She also counts the days since receiving the life-saving gift.

Dubeau devotes herself to raising organ and tissue donation awareness and showing others what a new organ means to people on the waiting list.

“We want people to realize there is life after transplant,” Dubeau said.

She’s organizing the inaugural Waterloo Transplant Trot on Saturday, a five-kilometer walk or run race at Waterloo Park. The fundraiser is held annually in cities across the country in support of the Canadian Transplant Association, which raises awareness about organ donation and encourages transplant recipients to pursue healthy, active lifestyles. 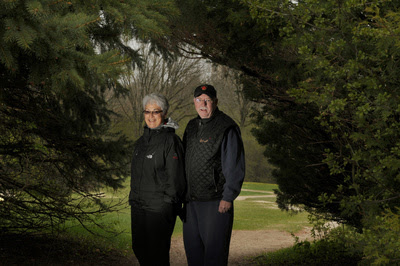 Many people waiting for a new organ don’t get that chance.

About 1,500 people are on the list for an organ transplant in Ontario. Every three days, one dies because there is no organ available, reports the Trillium Gift of Life Network.

“Unfortunately, there are not enough organs and that’s why we’re doing what we’re doing,” she said.

That’s why Dubeau talks publicly about her experience and urges people to sign up as organ donors. Only one out of five eligible people in Ontario are registered organ and tissue donors.

People can register easily online with the new website www.beadonor.ca.

She wants people to know organ and tissue donation does work. A viral pneumonia caused irreparable damage to her lungs, leaving her entirely dependent on oxygen and help with daily life. Now she’s living on her own and travelling.

Mike Sullivan also knows what a difference a new organ can make. He suffered severe heart failure for no known reason in the late 1990s. By the time he was put on the transplant wait list about a decade later, Sullivan was sleeping 20 hours a day and relying on numerous medications because his heart was pumping so poorly.

He endured a weeklong battery of tests to find out if he was suitable and healthy enough for a transplant before finally hearing he was on his way to a new heart.

“A light bulb went off and the sun shone,” said Sullivan, 59.

Less than a year later, he was readied for surgery. Later that day, he was up and walking. He’s suffered no serious complications since the transplant early last year. “I just have never had a down day,” said Sullivan, who is volunteering as course manager.

Both Sullivan and Dubeau are thankful for every day.

The Waterloo Transplant Trot begins at 10 a.m. Awards will be presented to the top two women and men finishers. Prizes will also be drawn after the race and each walker gets a shirt and goody bag for the $30 fee. People can also collect pledges.

Register for the walk online at www.events.runningroom.com or pick up a form at the Waterloo Running Room until May 4. Late registration on race day goes from 8:30 to 9 a.m.

“You Have the Power to Donate Life – to become an organ and tissue donor Sign-up today! Tell Your Loved Ones of Your Decision”
Australia, register at Australian Organ Donor Register
New Zealand, register at Organ Donation New Zealand
Canada - Ontario beadonor.ca other Canadian provinces
South Africa, http://www.odf.org.za/
United States, donatelife.net
United Kingdom, register at NHS Organ Donor Register
Your generosity can save or enhance the lives of up to fifty people with heart, kidneys, liver, lungs, pancreas and small intestine transplants (see allotransplantation). One tissue donor can help by donating skin, corneas, bone, tendon, ligaments and heart valves
Has your life been saved by an organ transplant? "Pay it forward" and help spread the word about the need for organ donation - In the U.S. another person is added to the national transplant waiting list every 11 minutes and 18 people die each day waiting for an organ or tissue transplant. Organs can save lives, corneas renew vision, and tissue may help to restore someone's ability to walk, run or move freely without pain. Life Begins with You.
Posted by Merv Sheppard at 9:50 AM