Cystic Fibrosis robs woman of ability to do normal things

New Brunswick, Canada woman now has hope for the future as she awaits a double lung transplant

by Chris Morris The Daily Gleaner

This Christmas holds special promise for 25-year-old Heather MacInnis of Harvey, who's finally able to dream about breathing freely and living normally.

The St. Thomas University student will soon be moving to Toronto with her mother, where she will await a rare, double-lung transplant and the chance for a longer, healthier life.

She has had cystic fibrosis - a genetic, chronic and fatal disease - all her life. But in the last few years, it has steadily robbed her of breath and the ability to carry out routine activities.

MacInnis said cystic fibrosis is wearing her down, and a lung transplant is her best chance at life.

"It's a chance, not a promise, that you will have lots of years and great lungs," she said of the transplant program.

"But it's the only option. It's a chance for me to get five, 10, 20 more years. Even a few more years is always worth the effort and a brief chance, if anything, to be normal for a little while or as normal as my life will ever be. There would still be medications, but there won't be three to five hours a day of treatments or struggling to get up a flight of stairs."

MacInnis is down to just 20 per cent lung capacity.

She is sitting in a room at the Dr. Everett Chalmers Hospital in Fredericton. It's as homey as it can be for the bright-eyed, petite brunette, including a quilt on the hospital bed and a small artificial Christmas tree on the window ledge. 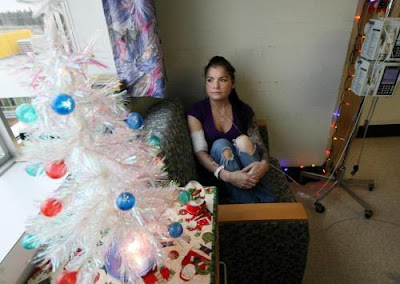 St. Thomas University student Heather MacInnis, 25, looks out the window in her room at the Dr. Everett Chalmers Regional Hospital on Monday afternoon. MacInnis will soon leaving for Toronto to wait for a double-lung transplant. She says the operation is a chance for as normal a life as she can hope for.
She's hooked up to oxygen 24 hours a day and has feeding tubes and other lines supporting her. Her voice is raspy and she coughs often.

Her Christmas wish is big: new lungs for herself, a cystic fibrosis cure for everyone else and freedom from stress and worry for the people she loves.

"New lungs for me, no CF for everybody else and a stress-free holiday," she said with a smile.

One in every 3,600 children born in Canada has cystic fibrosis.

More and more people with cystic fibrosis are getting lung transplants, which don't cure the disease, but provide relief from symptoms such as coughing and shortness of breath. According to the most recent statistics, 44 cystic fibrosis patients received transplants in 2009 in Canada.

MacInnis' friends and family have launched a fundraising campaign to raise money for the move to Toronto. She will likely be there at least a year, waiting six to nine months for a new set of lungs and then going through several months of rehabilitation.

The costs will be substantial. She and her mother will have to live in downtown Toronto, where rent is steep, because they have to be as close as possible to medical facilities.

"So we have to be close to the hospital."

Some of her costs are covered by medicare, but not all of them.

MacInnis has been a STU student for about eight years, studying religious studies and sociology. She's close to finishing her degree, but she constantly loses time because of health problems.

University officials said staff members are gearing up to raise money for her expected yearlong stay in Toronto.

"She has proven herself a natural leader in the classroom or seminar learning environment: always prepared, organized, insightful, articulate," he said.

MacInnis said she's still coming to terms with the prospect of having new lungs and being able to breathe normally.

"The chance to have new lungs, it's crazy," she said.

"The idea that I'll be able to get around like everybody else, you know I don't really know what that is like. I'm excited to find out. I'm sure it will be an adjustment, but a good adjustment."

Several fundraising events are being planned for MacInnis, including a musical show and silent auction in Harvey on Jan. 28.

There are two accounts set up for donations, both are in her sister's name, Barbara MacInnis: account number 20404 02375 23 at Scotia Bank at the corner of Smythe and Dundonald streets; and account number 00934-5030580 at RBC in Harvey.

“You Have the Power to Donate Life – to become an organ and tissue donor Sign-up today!
Tell Your Loved Ones of Your Decision”
Australia, register at Australian Organ Donor Register
New Zealand, register at Organ Donation New Zealand
Canada - Ontario beadonor.ca
other Canadian provinces
South Africa, http://www.odf.org.za/
United States, organdonor.gov
United Kingdom, register at NHS Organ Donor Register
Your generosity can save or enhance the lives of up to fifty people with heart, kidneys, liver, lungs, pancreas and small intestine transplants (see allotransplantation). One tissue donor can help by donating skin, corneas, bone, tendon, ligaments and heart valves
Has your life been saved by an organ transplant? "Pay it forward" and help spread the word about the need for organ donation - In the U.S. another person is added to the national transplant waiting list every 11 minutes and 18 people die each day waiting for an organ or tissue transplant. Organs can save lives, corneas renew vision, and tissue may help to restore someone's ability to walk, run or move freely without pain. Life Begins with You.
Posted by Merv Sheppard at 4:36 PM