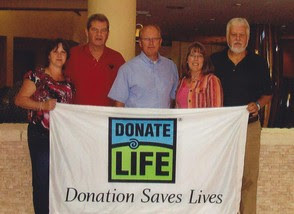 A new specialty license plate approved by the state General Assembly will promote organ donations. The bill that created the plate was sponsored by Rep. Mitch Gillespie (center). He is standing behind a banner that shows the Donate Life logo that will appear on the new specialty plate. Debbie Harris and her husband, David, stand on the left. David Harris received a heart transplant in 2004. Anita Erwin and her husband, Mike, stand on the right. Anita Erwin’s son Michael Williams was an organ donor and his heart was transplanted into Harris. (Photo contributed)
By Mike Conley The McDowell News
Seven years ago, a young man in Kannapolis was killed in an automobile accident. Even though his young life was tragically cut short, it allowed three other people, including a McDowell man, to have a new chance at life.

And now, a new specialty license plate in North Carolina will encourage others to do the same.

Recently, N.C. Rep. Mitch Gillespie announced the passage of a bill in the General Assembly in June that creates a specialty plate to help educate the public about organ donation. Gillespie, a Republican from McDowell, sponsored House Bill 289/S.L. 2011-392. This bill creates a specialty license plate that promotes organ donation in North Carolina. The bill was signed into law by Gov. Bev Perdue.

The proceeds from the sale of this special plate will be used benefit Donate Life North Carolina, a non-profit, collaborative group of organizations that promote eye, organ and tissue donation. “Working together, the member organizations are directly involved in supporting donor families and facilitating organ, eye and tissue transplants across the state,” reads Donate Life North Carolina’s website. “Our mission is to inspire all North Carolina residents to save and enhance lives by registering as organ, eye and tissue donors.”

The money made from the sale of the specialty plates will be used to educate the public about organ donation, promote donor registration and to support donor families and transplant recipients and their families at the five transplant centers by helping to pay their expenses, according to a news release from Gillespie’s office.

The Donate Life program in North Carolina has already helped many people. On June 21, 2004, Michael Williams was involved in an automobile accident, along with his girlfriend. Williams died the next day on June 22. He was just a few days short of his 18th birthday, which was June 26.

Williams attended South Rowan High School and was a member of the school’s swim team.

“He was a normal high school kid who enjoyed going to high school football games,” said his mother Anita Erwin of Kannapolis. “He was actively involved in his church youth group and he went on a mission trip to Australia. He had been accepted to Western Carolina University and his ultimate goal was to become a physical therapist.”

Williams was also an organ donor and because of this, he was able to save others. On the same day he died, his heart was transplanted into David Harris of Marion. Another man in North Carolina received a kidney while a man in Kentucky received his liver.

“I am thankful my son died a hero,” said Erwin. “His death saved the lives of three men. How can a mother be any more proud of her son than that?”

Harris received his new heart on June 22, 2004 during a transplant surgery performed at Carolinas Medical Center. Harris was 46 at the time of the surgery and in desperate need of a new heart.

“Michael is my hero,” said Harris, who is 53 now. “If it hadn’t been for him, I wouldn’t have received a second chance in life.”

This wasn’t the first time the Harris family has been affected by organ donation. On March 29, 2003, Harris’ son Josh died of the same heart disease. The younger Harris made sure his organs would be donated, after he was gone, according to his father.

“Our whole family has been organ donors,” said David Harris. “My next-to-oldest brother got a new heart 21 years ago.”

After her son’s death, Erwin looked to see if there was a specialty plate in North Carolina that supports organ donation. Since none existed, she spoke with Harris about getting one created. Both had lost a child and both of their late children had been organ donors.

“(Harris) had the same passion for wanting to get this license plate going,” said Erwin.

Because of these experiences, Harris talked to Gillespie about sponsoring a specialty plate that would promote organ donation and help those are involved in the effort.

“I had approached Mitch about this after I had my transplant,” said Harris. “I kind of wanted to do something. A donor saved my life. I think it’s a wonderful thing.”

“David contacted me five years ago concerning a specialty plate to support organ donation,” said Gillespie. “This year, a bill finally passed that would allow the plate to be issued. This tag remembers the donors, honors those who receive the donated organs and brings focus on organ donation that will save lives.”

And the Harris family has developed a strong relationship with the family of Michael Williams. David Harris and his wife, Debbie, have forged a bond with Anita Erwin and her husband, Mike.

“Anita and I have done a TV commercial together,” said Harris. “We’ve done a magazine article together. We are really into donating life. They are just like my family.”

Erwin and Harris have been featured in a newspaper article in Concord. They also gave a presentation about organ donation at Harris’ church, the First Freewill Baptist on Baldwin Avenue.

The license plates will begin production when the first 300 applications are received, Gillespie said.

The cost for a regular Donate Life North Carolina specialty plate is an annual $20 fee, in addition to the regular license fee. A portion of the fee for the specialty plate will be sent to Donate Life North Carolina to be shared with the five transplant centers. Applicants can also get a personalized Donate Life license plate for a $50 annual fee with four spaces for a personalized message, according to the organization’s website.

Both Erwin and Harris said they appreciate how much Gillespie worked to get this approved.

“Every time it would come up to be voted on, (Gillespie) would call me and let me know,” said Harris. “He was excellent in getting it approved.”

“You Have the Power to Donate Life – Sign-up today! to become an organ and tissue donor
Tell Your Loved Ones of Your Decision”
Australia, register at Australian Organ Donor Register
New Zealand, register at Organ Donation New Zealand
Canada - Ontario beadonor.ca
other Canadian provinces
South Africa, http://www.odf.org.za/
United States, organdonor.gov
United Kingdom, register at NHS Organ Donor Register
Your generosity can save or enhance the lives of up to fifty people with heart, kidneys, liver, lungs, pancreas and small intestine transplants (see allotransplantation). One tissue donor can help by donating skin, corneas, bone, tendon, ligaments and heart valves
Has your life been saved by an organ transplant? "Pay it forward" and help spread the word about the need for organ donation - In the U.S. another person is added to the national transplant waiting list every 11 minutes and 18 people die each day waiting for an organ or tissue transplant. Organs can save lives, corneas renew vision, and tissue may help to restore someone's ability to walk, run or move freely without pain. Life Begins with You
Posted by Merv Sheppard at 8:18 AM