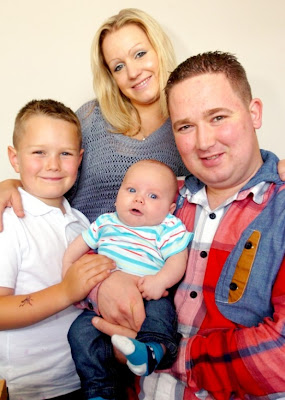 Ben Knight (26) had the five-and-a-half-hour op at Whythenshawe Hospital, Manchester – just weeks before the birth of his son, Oscar.

Ben, who lives with his partner Lindsey Burtonwood in Whalley Road, Simonstone, and is also father of six-year-old Dylan, feared he would die before his new baby was born.

Having been given a “second chance”, he is urging people to sign the organ donation register and raise money for New Start (Whythenshawe Hospital’s Transplant Fund).

“I was worried I wouldn’t see the birth of Oscar who is 13 weeks old,” said Ben. “It was a very difficult time for Lindsay and the rest of my family.”

A former pupil of Ribblesdale High School, Ben explained how he was fit and healthy until he contracted a throat infection aged 16. “I was admitted to Burnley General Hospital where tests revealed I had glandular fever. I was transferred to the Critical Care Unit and remained there for two months as my heart was only working 15%.” He added that, after four months, he started to respond to the medication and was put on blood pressure tablets and beta-blockers.

Ben, an ex-pupil of Sabden Primary School, was added to the organ donor waiting list and had to change his lifestyle, giving up his job as an apprentice builder and hobbies, including football.

But, after 14 months on the waiting list, Ben’s condition deteriorated last October. He said: “I contracted a chest infection and my health went from bad to worse. I had a blood test which showed my oxygen levels were really low. The doctors told me my body had begun to reject the medication that had kept me alive for 10 years.

“As weeks passed, I began to feel breathless, tired, weak, had no motivation and was freezing all the time. My name was added to the emergency heart transplant list, but it was a frightening time for us as Lindsey was pregnant and there was no guarantee a donor match would be found in the next few months.”

In April Ben received the news a possible match had been found. “It all happened very quickly. I was relieved but scared at the same time.”

It is believed an 18-strong team of surgeons assisted in the operation and Ben made a full recovery. He added: “I was discharged in May and Oscar was born in June so I had little time to build my strength!”

Ben has thanked medics at Whythenshawe Hospital and friends Jack and Julie Holding, who took part in a cycle ride from Land’s End to John O’Groats to raise money for New Start.

Ben went on: “Everyone deserves a second chance in life if there is a chance, so I urge people to please consider the donor register.”


“You Have the Power to Donate Life – Sign-up today! to become an organ and tissue donor
Tell Your Loved Ones of Your Decision”
Australia, register at Australian Organ Donor Register
New Zealand, register at Organ Donation New Zealand
Canada - Ontario beadonor.ca
other Canadian provinces
South Africa, http://www.odf.org.za/
United States, organdonor.gov
United Kingdom, register at NHS Organ Donor Register
Your generosity can save or enhance the lives of up to fifty people with heart, kidneys, liver, lungs, pancreas and small intestine transplants (see allotransplantation). One tissue donor can help by donating skin, corneas, bone, tendon, ligaments and heart valves
Has your life been saved by an organ transplant? "Pay it forward" and help spread the word about the need for organ donation - In the U.S. another person is added to the national transplant waiting list every 11 minutes and 18 people die each day waiting for an organ or tissue transplant. Organs can save lives, corneas renew vision, and tissue may help to restore someone's ability to walk, run or move freely without pain. Life Begins with You
Posted by Merv Sheppard at 9:17 AM