When I was recovering from my lung transplant due to pulmonary fibrosis (the same disease as Hélène Campbell) I experienced the same "setbacks" she's going through. Breathing tubes, lung infection, etc. but the medical team at Toronto General Hospital was right on top of it and pulled me through wonderfully and I've no doubt they will do the same for her. 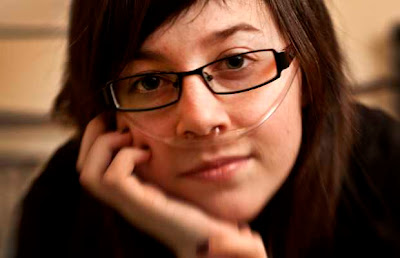 Hélène Campbell, a Canadian double lung transplant recipient and online organ donation crusader, suffered a setback in her recovery, her mother said on her daughter's 21st birthday.
In an update Wednesday, Manon Campbell said Hélène was again hooked to a ventilator Sunday in Toronto General Hospital after she experienced trouble breathing.
Manon Campbell said in a post on her daughter's A Lung Story website that doctors decided to perform a tracheostomy — an opening in the neck — to facilitate chest physiotherapy, deep breathing, coughing and suctioning.
She also said her daughter is taking antibiotics for a lung infection and is being treated with extra doses of steroids for an early onset of organ rejection, which she said is not uncommon for transplant patients.
This comes after a week Campbell's family described as a "roller-coaster ride."

Campbell continues 'to be positive'

On Saturday, Campbell took to Twitter to announce she is breathing on her own for the first time after her double-lung transplant on April 6.
"Despite the medical ups and down, Hélène continues to participate very actively in her care," wrote Manon Campbell.
"We witnessed some of her first dance moves, bobbing her head and shoulders to the tune of Walking on Broken Glass by Annie Lennox today. She daily displays persistence, patience and perseverance continuing to be positive. She even perceives the tracheostomy as a welcomed birthday present as she celebrates her twenty first birthday today."
Campbell achieved fame using her Twitter account @alungstory to raise awareness about organ donation. Her campaign caught the attention of celebrities including teen pop star Justin Bieber and U.S. talk-show host Ellen DeGeneres, who had Campbell on her show via Skype in February to discuss organ donation.
Campbell's Twitter account now has more than 13,000 followers.
Campbell had been waiting for the transplant surgery since last July, when she discovered she had idiopathic pulmonary fibrosis, a degenerative lung disease, after collapsing on a hiking trail.
She moved in January from the Ottawa neighbourhood of Barrhaven to Toronto with her mother while her father and three siblings remained in the Ottawa area.
“You Have the Power to Donate Life – to become an organ and tissue donor Sign-up today! Tell Your Loved Ones of Your Decision”
Australia, register at Australian Organ Donor Register
New Zealand, register at Organ Donation New Zealand
Canada - Ontario beadonor.ca other Canadian provinces
South Africa, http://www.odf.org.za/
United States, donatelife.net
United Kingdom, register at NHS Organ Donor Register
Your generosity can save or enhance the lives of up to fifty people with heart, kidneys, liver, lungs, pancreas and small intestine transplants (see allotransplantation). One tissue donor can help by donating skin, corneas, bone, tendon, ligaments and heart valves
Has your life been saved by an organ transplant? "Pay it forward" and help spread the word about the need for organ donation - In the U.S. another person is added to the national transplant waiting list every 11 minutes and 18 people die each day waiting for an organ or tissue transplant. Organs can save lives, corneas renew vision, and tissue may help to restore someone's ability to walk, run or move freely without pain. Life Begins with You.
Posted by Merv Sheppard at 10:12 AM