Please help me, I have 8 weeks to live 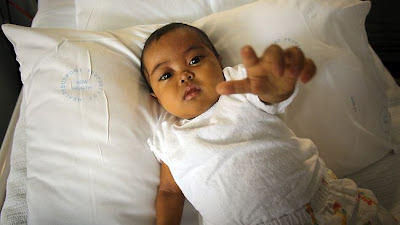 BABY Yvanna has just two months to live - unless she can find a donor.

The eight-month-old is gravely ill with liver failure in The Children's Hospital at Westmead. Doctors say she will certainly die if they cannot find a compatible organ.

Yvanna Cartilla is one of a handful of NSW babies younger than one who will require an organ transplant this year.

Doctors realised something was wrong with Yvanna when she was born extremely jaundiced. She had her first operation at six weeks, when a camera was inserted into her to examine her liver.

Specialists confirmed she had biliary atresia, a disease in which, for unknown reasons, the body begins to destroy its bile ducts, which digest food, and eventually destroys the liver as well.

The condition occurs in one in 10,000 to 15,000 live births in Australia every year, although a third of those can be successfully treated by a relatively straightforward surgery called a Kasai, which did not work in Yvanna's case.

She was put on the donor transplant list two months ago and re-admitted to hospital last weekend with a high fever.

Yvanna's mother, Ellen Cartilla, 42, has been keeping a bedside vigil, praying for a donor.

"Looking at Yvanna every day is heartbreaking," the mother of four from Merrylands said. "My children ask, 'When is she going to be better? How long do we have to wait?'

"For me as a mother, it is hard to answer them."

Ms Cartilla, a cook at a childcare centre, said she wanted people to be aware of the importance of being an organ donor so that babies like Yvanna would have a chance of survival.

In the best-case scenario, doctors will receive a compatible organ from a child donor - in Yvanna's case, with blood type B or O - whose liver will be a good size for her.

But because child donors are so rare - the hospital gets only one or two children's livers a year - it is more likely the donor will be an adult whose liver can be split, with a child receiving the smaller part and an adult getting the rest.

If Yvanna has a transplant, she has a 93 to 95 per cent chance of survival, although she will be on anti-rejection drugs for the rest of her life.

In the worst-case scenario, and only if he is a match, her father Silvano will undergo an operation to have part of his liver removed - a risky procedure for a living donor.

The 50-year-old hotel restaurant supervisor is undergoing tests to see if his liver is compatible with his daughter's.Paediatric transplant surgeon Gordon Thomas said Yvanna would "surely die" without a transplant.

"She is very little, and she is deteriorating really fast," Dr Thomas said. "We're concerned about her because, even though she's only eight months, she's progressing badly. There is an urgency."

Although his team, which performs most of Australia's paediatric liver transplants, had a high success rate, the real heroes were the donors, Dr Thomas said.

During DonateLife Week, which begins today, Australians are urged to talk to those closest to them about becoming a donor.


“You Have the Power to Save Lives – Register to be an organ and tissue donor & Tell Your Loved Ones of Your Decision”
Register to be a donor in Ontario at Trillium Gift of Life Network NEW for Ontario: recycleMe.org - Learn The Ins & Outs Of Organ And Tissue Donation. Register Today!
For other Canadian provinces click here
In the United States, be sure to find out how to register in your state at ShareYourLife.org or Download Donor Cards from OrganDonor.Gov
In Great Britain, register at NHS Organ Donor Register
In Australia, register at Australian Organ Donor Register
Your generosity can save or enhance the lives of up to fifty people with heart, kidneys, liver, lungs, pancreas and small intestine transplants (see allotransplantation). One tissue donor can help by donating skin, corneas, bone, tendon, ligaments and heart valves
Has your life been saved by an organ transplant? "Pay it forward" and help spread the word about the need for organ donation - In the U.S. another person is added to the national transplant waiting list every 11 minutes and 18 people die each day waiting for an organ or tissue transplant. Organs can save lives, corneas renew vision, and tissue may help to restore someone's ability to walk, run or move freely without pain. Life Begins with You
Posted by Merv Sheppard at 3:18 PM