BULLETIN - Jerome Feldman was sentenced to 15 years in prison in May, 2010. Read all about it.

This is a follow-up on my previous post about Jerome Feldman, the disgraced psychiatrist (license revoked) who swindled dying patients and their families out of thousands of dollars for deposits on organ transplants abroad that were phony from the start. My hat is off to the DeWitt, N.Y. police department and investigator Scott Kapral who went to bat for the family that had been scammed out of $70,000.

Map shows the trail that led to Feldman's arrest. 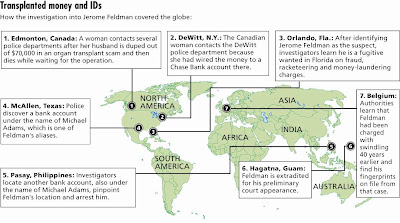 
By Sue Weibezahl Porter on Syracuse.com

It all started with a phone call to a small Onondaga County police station -- an unlikely beginning for what became an international criminal investigation.

A woman from Canada called to report that her husband was dying in the Philippines while waiting for a liver transplant.

She had wired $70,000 to a DeWitt bank for the transplant surgery.

"I can't tell you how many departments I called before I tried DeWitt," said the woman, who asked that her name not be used because she fears for her safety. "I had the door slammed in my face by everyone."

The Edmonton police department and the Royal Canadian Mounted Police were among those that turned down the case because it involved so many jurisdictions, she said.

The woman had never been to DeWitt and didn't know its department has just 38 employees, she said.

That one call led to a nine-month investigation involving a half-dozen law enforcement agencies, three countries and hundreds of thousands of dollars scammed from victims in a bogus organ transplant scheme.

It led to a "war room" being set up in the Federal Building in downtown Syracuse; a DeWitt investigator being deputized by the FBI; and a weeklong trip to the Philippines to track down the suspect.

Jerome Feldman was arrested in Manila, transported to Guam and extradited to Syracuse April 1 to face the federal charges.

Here's how it unfolded:

The DeWitt police department, which handles about 22,000 cases a year, received the call in June from the Canadian who believed she had been swindled.

She told police she had wired $70,000 to a DeWitt bank to pay for a liver transplant in the Philippines. Her husband later died waiting for the transplant. The doctor whom they had hired on the Internet did not exist, she told police.

From there, said DeWitt Investigator Scott Kapral, "We just followed the paper trail and followed the money and it all snowballed."

The first week, managers at DeWitt's Chase Bank helped police determine that the account had been opened in 2001 by an "Alberto Gomez."

They also tentatively identified the real account holder as Jerome Feldman because of transfers of money to his children and his estranged wife.

DeWitt investigators "googled" Feldman on the Internet and learned that he was wanted in Florida on felony charges. They also saw his mug shot. Chase bank officials confirmed that the mug shot was of the same man who opened the account there using a fake ID: a Mozambique international driver's permit, with his photo on it.

The Canadian woman told them how she had discovered the bogus doctor -- through an Internet Web site advertising help in securing fast and safe organ transplants.

Feldman's Web site account also listed its creator as Gomez, who lived on East Genesee Street in DeWitt. That address came back to a mailbox in a UPS store.

Authorities said Feldman was using that post office box and another one in Fayetteville to funnel money from the Chase account to relatives, to another account in Texas and a third account in the Philippines.

He used a bogus international driver's permit from England as identification to open the postal boxes, according to the criminal complaint.

"The task then became tracking him down," DeWitt police Chief Eugene Conway said.

The department turned to the Syracuse field office of the FBI.

FBI officials deputized Kapral and streamlined his passport application, so he could go to Manila, more than 8,300 miles away.

Through bank wire transfers from DeWitt to Feldman's estranged wife, his children and to an account in Texas, listed under Michael Adams -- one of his aliases, which then wired money to a bank in the Philippines -- detectives confirmed his identity and pinpointed his location.

The farthest Kapral had been before on an investigation was New York City.

The farthest anyone in the department had traveled before was to Florida, and that was 20 years earlier, Conway said.

The FBI set up an office in the Federal Building where investigators could work full time. The bureau paid for Kapral's airline tickets, accommodations and overtime costs, Conway said. It would likely have totaled more than $20,000 if the department had tried to continue on its own, he said.

Investigators worked with the state police, the Florida state attorney general's office, the U.S. embassy in Manila, the Department of Justice, Office of International Affairs, and Filipino authorities, sifting through thousands of pages of bank statements and paperwork.

They accessed Feldman's e-mail accounts and his wife's phone records, which made them realize that Feldman was continuing to court new victims while they were trying to close in on him, Kapral said.

"That was truly a nauseating thought," he said.

Poring over the e-mails, investigators saw Feldman teach another man how to hide his Internet service provider address to make it harder to trace him.

He wrote his estranged wife, Bonnie Feldman, of Baldwinsville, about having to think seriously about what countries he could live in because some had extradition treaties with the United States, listing England, Canada, Australia and Switzerland as being particularly risky.

Feldman boasted to one son about his 34-year-old Filipino girlfriend who "cleans my apartment spotless." He waited to tell her his true identity, he wrote his son.

"I told her my real first name, which was a shock since my travel passport has a different name and nationality than she knew," he e-mailed Albert Feldman.

Investigators put themselves in victims' shoes -- and by then they had identified four more victims -- who saw the potential of a life-saving operation, only to have their hopes dashed and their money gone.

"We felt that urgency of 'We've gotta get this guy right away,' but you have to do it methodically and do it right," Kapral said.

Feldman cast the net wide, using the computer Web site* to reel in prospective victims, court documents said. He'd promise the amount they paid -- usually around $75,000 -- would cover all their medical expenses. They would arrive in the Philippines and realize no surgeries had been scheduled and the doctor who was to perform the operation didn't exist.

Four of the five victims died without getting their kidney or liver transplant surgeries. The fifth had the surgery done on his own after Feldman's sham fell through, and he later died.

"What really drove us was the fact that we not only had a fraud, but a fraud where there was the death of a loved one, and that took it to a whole new level," Kapral said. "The way this guy exploited his victims really set the tone for the level of passion we had for this."

Some of Feldman's e-mails to prospective clients were rife with spelling, grammatical and punctuation errors, but prosecutor Carla Freedman said she could understand why that might not have been a warning to them.

"They were sort of blinded by their desperation to get an organ," she said.

The Canadian victim said she was leery, particularly after learning her husband had not been met at the Manila airport and days after his arrival, had still not had an appointment with the bogus doctor.

"Don't think for a minute that we didn't know we were getting screwed," she said, "but we had absolutely no choice. My husband's life was on the line."

*I deleted the URL from this post - he doesn't deserve more publicity. Merv.

Posted by Merv Sheppard at 1:20 PM