As organ transplant recipients we must follow a diet that keeps our weight at normal levels and does not contribute to cardiovascular disease or diabetes. This study is an eye opener for me because I had no idea that as little as one cola a day could put me at risk for a heart attack. It's diet drinks only for me from now on. 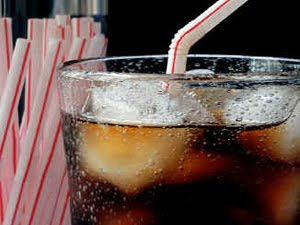 This study found that men participating in the Health Professionals Follow-up Study had a significantly higher risk of a myocardial infarction if they consumed more sugar-sweetened beverages. The same risk was not apparent for artificially sweetened beverages."

Men who frequently drink sodas and other sugar-sweetened beverages may be putting themselves at risk of a heart attack, an observational study showed.

In a study of male healthcare professionals, those who consumed the most sugary drinks -- a median of 6.5 per week -- were 20% more likely to have a myocardial infarction (MI) during follow-up than those who never drank them (RR 1.20, 95% CI 1.09 to 1.33), according to Frank Hu, MD, PhD, of the Harvard School of Public Health in Boston, and colleagues.

A similar relationship was not seen for consumption of artificially sweetened diet beverages, they reported online in Circulation: Journal of the American Heart Association.

"These results, as well as those from other observational studies and trials, support recommendations to reduce the consumption of sugar-sweetened beverages in order to prevent cardiovascular disease," the authors wrote.

Sugar-sweetened beverages have been associated with weight gain and type 2 diabetes, but few studies have examined the relationship between the sugary drinks and coronary heart disease.

Hu and colleagues looked at data from the Health Professionals Follow-Up study, a prospective cohort study of mostly white men who were ages 40 to 75 at baseline in 1986.

The current analysis included 42,883 participants after excluding those with type 2 diabetes, cardiovascular disease, or cancer at baseline.

Over 22 years of follow-up, there were 3,683 incident coronary heart disease cases, defined as fatal or nonfatal MIs.

"This suggests that sugar-sweetened beverages may impact on coronary heart disease risk above and beyond traditional risk factors," the authors wrote.

When treated as a continuous variable, each additional serving per day of sugar-sweetened beverages was associated with a 19% greater relative risk of coronary heart disease (P<0.01). That is consistent with a previous analysis of women participating in the Nurses' Health Study, which showed that each serving increase was associated with a 15% greater risk. Hu and colleagues also examined the relationship between consuming sugary drinks and various biomarkers, finding an association between greater consumption and adverse effects on triglycerides, C-reactive protein, interleukin-6, tumor necrosis factors 1 and 2, HDL cholesterol, lipoprotein(a), and leptin (P≤0.02 for all). Referring to the inflammatory markers, they noted that "inflammation is a key factor in the pathogenesis of cardiovascular disease and cardiometabolic disease, and could represent an additional pathway by which sugar-sweetened beverages influence risk." The study, according to the authors, was limited by some error in measuring dietary intakes, the uncertain generalizability of the findings beyond the study population, the possibility of unmeasured and residual confounding, and the large number of comparisons that were made. The study was supported by a postdoctoral fellowship from the Canadian Institutes of Health Research. The Health Professionals Follow-up Study is supported by four grants from the National Institutes of Health. The authors reported that they had no conflicts of interest. From the American Heart Association:

“You Have the Power to Donate Life – to become an organ and tissue donor Sign-up today!
Tell Your Loved Ones of Your Decision”
Australia, register at Australian Organ Donor Register
New Zealand, register at Organ Donation New Zealand
Canada - Ontario beadonor.ca
other Canadian provinces
South Africa, http://www.odf.org.za/
United States, donatelife.net
United Kingdom, register at NHS Organ Donor Register
Your generosity can save or enhance the lives of up to fifty people with heart, kidneys, liver, lungs, pancreas and small intestine transplants (see allotransplantation). One tissue donor can help by donating skin, corneas, bone, tendon, ligaments and heart valves
Has your life been saved by an organ transplant? "Pay it forward" and help spread the word about the need for organ donation - In the U.S. another person is added to the national transplant waiting list every 11 minutes and 18 people die each day waiting for an organ or tissue transplant. Organs can save lives, corneas renew vision, and tissue may help to restore someone's ability to walk, run or move freely without pain. Life Begins with You.
Posted by Merv Sheppard at 7:54 AM